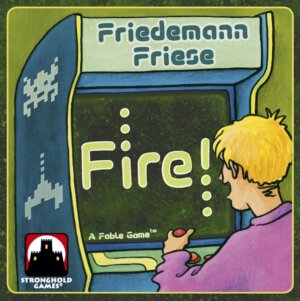 Stronghold Games will be releasing a retro, 1980’s arcade game inspired Friedemann Friese design next month. In Fire!, the players will attempt to fight off a number of ever more challenging waves of alien attackers ala Space Invaders. The game is for one or two players, ages 10+, plays in about 25 minutes, and will carry an MSRP of $19.95 when it arrives February 5th.

The Aliens attack, and only you can defend Earth. Charge your Weapons and destroy all Aliens, before you lose too much energy! Level by level, danger raises … are you ready to accept the challenges, and win all 9 Levels?

In Fire! you can play either in Solo Mode, playing all 9 Levels on your own, or in Team Mode, fighting cooperatively with a friend against all Aliens!

Fire! uses the Fable Game system introduced in Fabled Fruit. With the presorted deck of cards and a rules booklet separated in 9 sections, you will discover all 9 challenging Levels step by step. You can reset the game at any time and play it again!

Fire! plays like a retro arcade game of alien attacks! You must shoot down the alien invaders while trying to avoid losing too much energy. Play through 9 levels, adding and removing cards as the challenges increase each level.