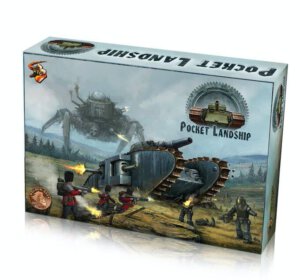 Following a successful Kickstarter, Word Forge Games is releasing the alternate history steampunk/WWI mashup Pocket Landship. The solitaire game, designed by Scott Allen Czysz and with rules for two player co-op, puts you in command of a landship (tank) tasked with destroying a number of enemy units while avoiding your own destruction. The game is for one or two players, ages 10+, plays in 15-45 minutes, and will carry an MSRP of $20.00 when it arrives September 15th.

“Commander, welcome to the world of ‘Pocket Landship’.  With your skill, our new diesel powered Landship, and a little luck, we hope to rid the land of these evil, intruding mechs, and end the steam age forever…GO BE VICTORIOUS!”.

Command a Landship (the original British term for tanks) to clear a sector of enemy infantry, artillery, and enemy mech and alike.

The player chooses a Landship to control with weapons or support units to create either a single high powered Landship or a more disparate defending force, including a squad of shock troops.

The enemy appears as waves of enemy mech, artillery, infantry, and mine fields arranged in 2 rows of 3 cards.

Each turn, the player will roll 3 6-sided dice and assign each die to each of their cards to attack the enemies. Then, for the enemy turn, roll the 3 dice and assign them low to high left to right across the front enemy line, then take the assigned actions.

Each card has its own damage track. When a card is destroyed, it is removed from the game. Win by destroying all 9 enemy cards. Lose if the enemy destroys your landship. 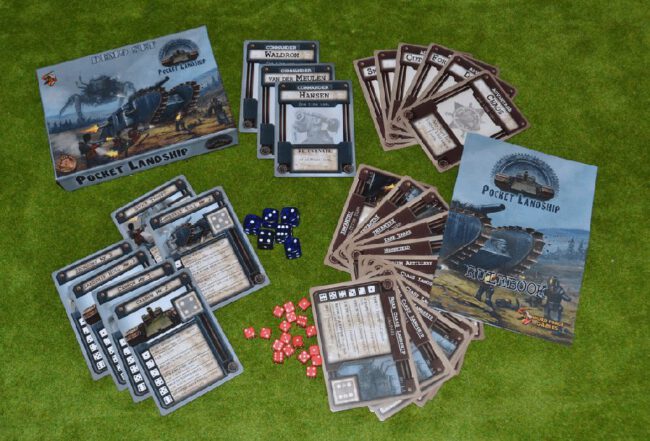