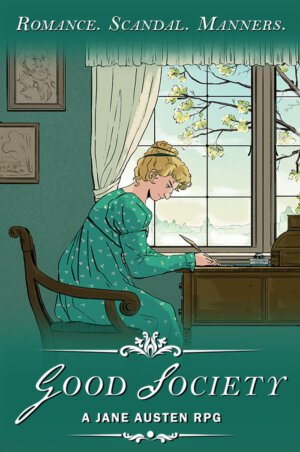 Folks know I’m always keeping my eyes open for interesting games which strike me as pretty interesting/unique. There’s currently a Kickstarter from the Austrailian company Storybrewers Roleplaying which really looks different and it’s an RPG based on the novels of Jane Austen. In Good Society – A Jane Austen RPG, players will take on character roles to concoct tales which would be immediately familiar to fans of the author’s novels. The crowdfunding project has already reached over 1000% of its funding goal and you can reserve a copy of the base game PDF, plus digital Desire and Relationship card, starting at a $10.50 pledge. The project runs through March 5th with an expected digital deliver in Octoebr with print to follow in November.

Good Society is a collaborative roleplaying game that seeks to capture the heart, and the countenance, of Jane Austen’s work. It is a game of balls, estates, sly glances, and turns about the garden. At least on the surface. Underneath this, just as in Austen’s own novels, it is a game of social ambition, family obligation and breathtaking, heart-stopping longing.

In this game, you play the type of characters that captured your imagination in Austen’s books – from a wealthy heir who falls in love with the aloof new arrival, to a charming socialite bent on ruining the reputation of their rivals. Exploit your advantages, connections, and family influence to achieve your secret desire – all while jealously guarding your good name.

Not only that, players in Good Society hold the power to control the story itself, and change it in their favour. Take control of influential connections, create rumour and scandal, and spend tokens to orchestrate balls, carriage accidents, and even marriages.

It is the elegance of Austen’s world, the sharpness of her wit, and the beauty of her passion that inspired us to create this system. But it is the deep and complex struggle between desire, expectation, and position that has guided its development – and we hope you will enjoy both elements.