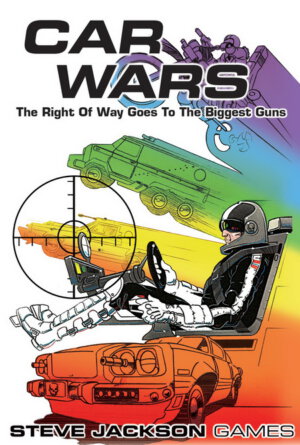 Yesterday Steve Jackson Games announced the release of the original Car Wars Classic rule book as a free online download. The big problem is SJG isn’t offering vehicle, pedestrian, obstacle counters or road section PDFs for free though. No. You have to purchase those digital files which, by my calculations, will run you about $11.00 if you get the two counter packages as well as the road section and obstacle counter download. This isn’t the first time SJG has offered free “Car Wars with a catch” either.

I call foul! This would be along the lines of saying Wizards of the Coast is trumpeting that you could download the original white box Dungeons & Dragons set absolutely free BUT only allow you to get the first book. In other words it’s like saying, “Here are some rules absolutely free! Go knock yourself out. Of course if you’d actually like to PLAY the game you’ll have to buy this, and this, and this. Oh, and you’ll have to print those components out on your own dime too.” Isn’t that a bit disingenuous?

Rather than this post becoming a rant on what I feel are major problems with upper management within SJG over the past few years (Is Mr. Jackson still running the show? All my gaming life I thought he was cooler than what seemingly the gaming company which bears his name has been up to lately) let’s just move on to the announcement…

He triggered the rear guns once more. A direct hit! The blue car skidded as the driver lost control – then flipped and caught fire.

That would teach him not to tailgate . . .

Car Wars is the game of the freeways of the future, where the right of way goes to the biggest guns. Players build vehicles complete with weapons, armor, power plants, and more. Then they take them out on the desolate roads, or maybe the brightly lit arenas, to come home as “aces,” or to crash and burn. The winners earn fame and cash to upgrade their rides. The losers are left in the dust.