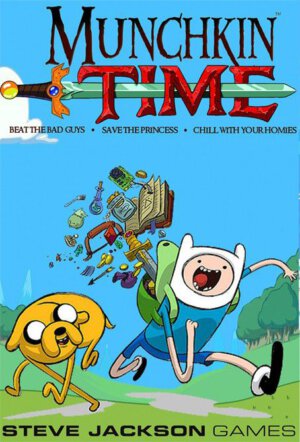 It’s been a long time coming but Steve Jackson Games has finally revealed more details about Munchkin: Adventure Time, which was announced at last August at Gen Con.

Now we know the game will release this Summer (at Gen Con perhaps?) with an MSRP of $24.95. Munchkin: Adventure time is a join project form both SJG and USAopoly and is for ages ten and up. Players will be able to take on the roles of their favorite characters including Finn, Jake, Marceline and others while the title also includes villains such as Me-Mow, Ricardio, and The Ice King.

It seems as if the game will play similarly to other editions of Munchkin with helper cards such as “Tree Trunks” and “Susan Strong” alongside weapons like “The Enchiridion,” “Ball Blam Burglerber,” and “Axe-Bass.”

Stay tuned for more details about Munchkin: Adventure Time as they become available.