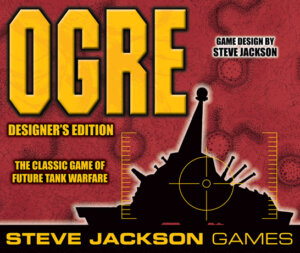 Bad news for folks who supported the Kickstarter project for the Ogre Designer’s Edition (or what is also being referred to as Ogre Sixth Edition) as Steve Jackson has indicated the game won’t see the light of day until April 2013 at the earliest. I’d say we can be sure we’ll see the game and I bet it will be smashing but it seems as if the folks at Steve Jackson Games should have better prepared the company for production of the title when the project was posting monster numbers rather than waiting until the end of its run. Although Jackson indicates a possible April ship date, my money is on an Origins or Gen Con release next year.

The status, in detail, is:

• The maps, the Pocket Ogre components, and the dice are all at print, and have been for some time.

• The counter/overlay sheets and the Ogre record sheets are completely finished and are getting their final in-house check as I write this. They’ll be at print very soon.

• The rulebook, scenario book, and player reference sheet have been laid out, reviewed, modified, re-reviewed . . . I spent the past few hours working on them – specifically, going over a lot of excellent and mostly tiny corrections from Daniel – and actually had hopes that I would finish tonight, but no, not quite. I’ll hit it again tomorrow, and I might get done, but I might also need to go back and forth with Daniel again. When we are provisionally happy with those components, PDFs will be posted for your review. Then, unless you find awful, awful things very quickly, they will go to print.

• The box and trays, and the carton they’ll be shipped in, present the greatest physical challenge because of their sheer size. Everything has to fit together well for shipment; then, after you have punched the counters and assembled the 3-D units, it STILL has to fit together well. And it has to be as durable as possible. The back-and-forth with the printers continues. Fortunately, the box is being handled by Phil and Sam, so it’s not stacked up behind the rules; it’s in parallel.

• We’ll finish the “Read Me First” after everything it’s documenting is really done. It will be the last thing to go to print. It will be the first thing you see when you open the box. Please, please, no kidding, read it first, because this is definitely a “some assembly required” game!

• The Ogre War Room app has been submitted to the App Store. We expect a routine approval in a week or so. We’ll report as soon as you can download it. The iPhone users will be our guinea pigs, and as soon as they can use it without dying in droves, we’ll start the ports to other devices.

So when will Ogre Sixth Edition actually ship?

It will be months. First, obviously, we’ve got to get everything actually finished and to press. That’s getting close, but it is NOT done. Then Phil says we should allow a month just for the questions from the factory. Then Chinese New Year will cost another month, more or less. Then printing. Then ocean freight. Best case: April? Maybe?

And it turns out that we will need a new BUILDING to house all these games and organize them for shipment. But until everything goes to press, we can’t estimate when we’ll need that building (rental? Huge temporary metal building?) or for how long. (For those keeping track of the successes and problems of Kickstarter projects: This is a DISeconomy of scale. With fewer orders, we could have done it in our existing warehouse. But I’m not complaining. It’s a neat problem to have. I’m just reporting something that surprised us.)

We’ll keep you posted, and I’m sorry it took me so long to get you this not-definite-enough information. The next update will be soon.

And now the good news: The Car Wars T-shirts are shipping. Depending on where you live, you should see yours either Real Soon, Fairly Soon, or When The Trails Open Again.