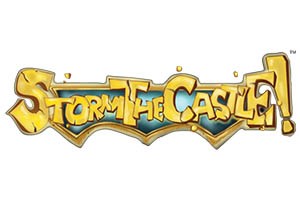 The game in which it’s good to be bad launched tonight on Kickstarter. In Storm the Castle one to four players lead their hordes against the castle Storm Haven (and in some ways against each other) in an attempt to breech the defenses and be the first to claim the stronghold as their own. Giant Goblin Games brings a semi-cooperative spin on fantasy action as the forces of the Dark Elves, Arcanists, The Green Tide, and Undead Horde compete to penetrate the formidable castle and heroes arrayed to protect humanity.

Finally a game where its GOOD to be BAD! Welcome to world of Storm the Castle!, a 1-4 player (yep you can play solo) semi-cooperative game where you take the exciting role of one of the four marauding Dark Forces armies in a race to breach Castle Storm Haven’s defenses and be the first player to enter its keep first. But you only have 8 turns to slug your way through its nigh-impenetrable forces. If the Dark Forces are unsuccessful, the Fantasy Defenders (comprised of chubby Halfling Archers, Musketmen, Dwarven Pikers, Warrior Knights, and Battle Mages), are victorious in repelling back the vile invaders and they must try again another day.

Each of the Dark forces (Dark Elves, Arcanists, The Green Tide (comprised of Giants, Pirate Orcs and Goblins, and Undead Horde) each with their unique units, power cards, upgrades, abilities, and ways of winning. Though they share the same goal of defeating the Fantasy Defenders, players are allowed and encouraged to use treachery and cunning to further their goal of total victory.

Each turn, players have a wide range of choices to customize how they want to play. Do they buy cheap pawns to throw against the castle walls or devastating siege machines or  lumbering giants, or equip strange equipment, or use arcane magic to turn the tides of battle? A host of choices (without brain burn) give the game a unique flavor allowing players to try multiple and varied strategies each time the game is played.

We want to give some awesome and quality rewards (see below) if our awesome backers fund at the ELITE level and don’t forget to check out more of the game’s details below.

We’ve demoed this game at many gaming clubs/groups and conventions and have had tremendous positive feedback and excitement to getting this game made. Who doesn’t want to be the bad guys? 🙂