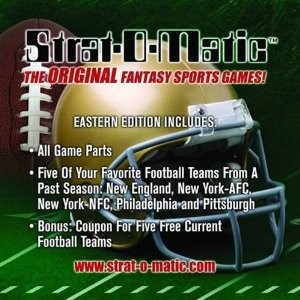 Each copy of the regional editions come with five of your favorite football teams from a past season, not THE past season, but A mystery past season where the teams were great. The Midwestern edition features the Bears, Packers, Colts, Vikings and the Chiefs. The game also includes a coupon for an additional five current teams for around 20 bucks.

You might not know about Strat-O-Matic football. Strat-O-Matic is a statistically based football simulation game where every player is rated with statistical precision in every phase of his talent – passing, running and receiving. Offensive linemen are rated separately for run blocking and pass blocking. Defenders are rated on their ability to stuff the run, shut down the pass and sack the quarterback. The real league leaders will rise to the top in your games. The underachievers will undermine your game plan. Each player’s strengths – and weaknesses – will come to life before your eyes.

Strat-O-Matic Football has been around for over 40 years, and is one of the best football simulation games on the market.