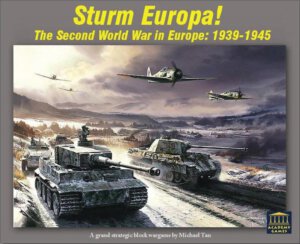 Coming soon from Academy Games is Sturm Europa!  it recreates the entire European conflict from 1939 to 1945.   It will use operations points vs events on cards similar to Twilight Struggle, plus fog of war simulated by hidden blocks.  I don’t know much about it so here is what Academy Games has to say:

Sturm Europa! is a grand strategic simulation, currently in pre-production, that recreates the entire European conflict during the Second World War. Wooden blocks are used to depict army sized units that create “fog of war” by not revealing unit type and strength until committed to battle. Period: Scenarios are included that cover the entire war, 1939 to the bitter end (Spring 1945 or later) or smaller campaigns that highlight smaller segments in this period.

Scale: Units represent armies and each turn represents 3 months. Detail will not be sacrificed in smaller scale battles such as amphibious/airborne assaults or the Africa campaign through the use of innovative game mechanics. The map board will employ area movement over land regions but the low block density allows players to realize the full impact of mobile warfare and appreciate the daunting size of Mother Russia without slowing game play unnecessarily. A unique front-reserve combat system allows for operational level details like blitzkriegs, assaults, encirclements, feints, static defense, and defense in depth which are details normally lost in grand-strategic simulations. 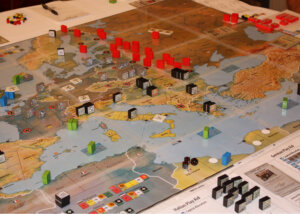 Units: Units are not only rated by movement, strength (steps), and firepower but also by quality. Elite units fire first and are much more effective at exploitation and sustained operations. Quality introduces a dimension that makes every unit truly unique as it can be upgraded and downgraded as the war progresses to reflect varying levels of experience, training, leadership, and technology.

Production: Sturm Europa! goes beyond the standard model of linking military production to a GDP estimate. Nations must mobilize to achieve full wartime production but it takes much more to wage war than just massive production lines. Manpower, oil, steel, and even trained pilots are all tracked without ANY bookkeeping through an innovative system of colored resource cubes. Resources are consumed with prolonged offensives so logistics plays just as much a factor as unit strength.

Event Cards: Cards introduce political, historical, and technological events in a realistic fashion without scripting or constant rule “look ups”. There is a tangible cause-effect relationship to every event and nothing occurs in a seemingly random or a-historical manner. The strategy cards require tough and gut wrenching decision making, which add a lot of fun and variation to the game. 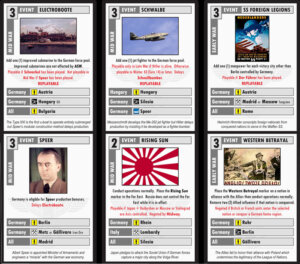 Technology: Players can customize their units to fight the style of war that best suits their strategy. Germany can develop the He 100 long range fighter that greatly improves their chances in the Battle of Britain. The Americans can develop a heavy-medium tank instead of sending Shermans to get chewed up by King Tigers. Tough decisions will have to be made to implement new technologies though. New designs don’t just start rolling off the assembly lines without causing a shortage of replacements on the front line while the factories retool and crews retrain.