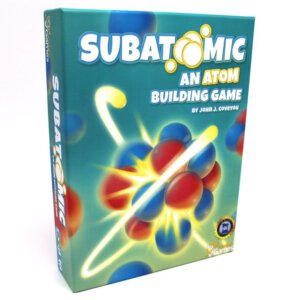 Next month will see the release of a second edition of Subatomic: An Atom Building Game arrive from Genius Games. In this deck-building game, players assemble subatomic particles while competing to gestate bigger and bigger atoms to score victory points. Subatomic is for two to four players, ages 10+, plays in 40-60 minutes, and will carry an MSRP of $39.99 when it arrives in December.

Subatomic is a deck-building game about building elements from subatomic particles! Players begin the game with a small deck of quarks and photons. Each turn, players draw a new hand of cards and decide to either build up their atom to score points, or buy stronger cards for their deck. Players use their quarks and photons to build protons, neutrons and electrons.

They then decide to either (1) place these subatomic particles within the atom on their player mat (racing to build up an entire atom which will score them points), or (2) use them to buy proton, neutron and electron cards which go into their deck (making their deck more powerful and allowing them to build atoms even faster in the future!).

Players may also “hire” famous scientists like Marie Curie, Niels Bohr, Maria Goeppert-Mayer and Albert Einstein. Players use scientists to break the standard rules of the game, like turning energy into matter and replicating cards played by other players!

Subatomic is great for the science classroom or a game night with family and friends. Subatomic is easy to learn, but exciting to master and encourages strategic timing and optimizing available resources. All the concepts covered in Subatomic are concepts that would be introduced in a basic high school level chemistry course. And it does so in a way that is fun and intuitive for everyone!