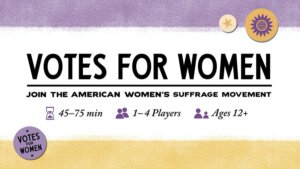 To mark the centennial anniversary of the ratification of the United States Constitution’s 19th amendment, Fort Circle Games has a new board game up on Kickstarter. Votes for Women, designed by Tory Brown, is a card driven game wherein players will navigate the seven decade long fight for suffrage. One side struggles for enfranchisement as the other aims to prevent women receiving the vote. Votes for Women is for one to four players, ages 12+, and plays in around 45-75 minutes. The project just launched yesterday and you can reserve a copy of the game for a $50.00 pledge through September 24th. Expected delivery is April of next year.

It’s 1848 in Seneca Falls, NY and America’s first women’s rights convention is meeting to declare “all men and women are created equal”. The most controversial element of the Declaration of Sentiments is “the right of equal franchise”. Attendees can’t possibly predict the 70 year road ahead: the masterful organizers or the eloquent speakers who will emerge, the continent-enveloping wars nor the inter-movement fights that might sink the whole effort, not even the pandemics and parades that lay ahead in the great battle for Votes for Women. Now, put yourself in their bloomers to decide the strategies and tactics needed to ratify the 19th Amendment and ensure Votes for Women is enshrined in the Constitution.

In Votes for Women, you are invited to join the movement for women’s suffrage, starting in 1848 at the Seneca Falls Convention and navigating the ups and downs of the next seventy years. Will you succeed in this card-driven game by winning support in three-fourths of the states needed for ratification? Or will the opposition stymie progress and prevent enough states from ratifying the Nineteenth Amendment, dashing our hopes for 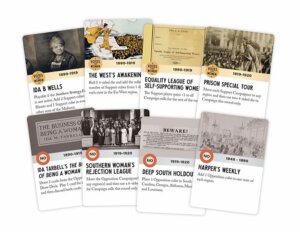 equality? Play this 60 minute game to determine who will out-campaign and out-organize their competition to win.

Votes for Women, designed by Tory Brown, can be played competitively, cooperatively, or in solitaire mode. Players may play cards for their events, to campaign, to organize or to call for a vote in state legislatures to ratify the Nineteenth Amendment. Game play occurs over three eras that correspond to important historical periods of the movement up to the exciting culmination of ratification in 1919 and 1920. The Support player needs 36 states to pass ratification to win while the Opposition player needs only 13 states to bury the 19th amendment.

The gorgeous cards feature some of the famous leaders we already know, plus many suffragists who have been left out of the narrative but whose contributions were critical to the passage of the 19th amendment, as well as the events, publications and clubs that were instrumental to winning not just suffrage but to advancing the women’s rights movement overall. The opposition cards highlight the events, forces, industries and individuals, many of them women, who nearly thwarted the greatest expansion of citizenship in American history.