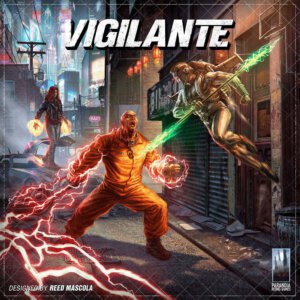 An interesting looking new superhero game will arrive from Paranoia Rising Games in early 2022. Vigilante is a mix of social deduction, action management, and tableau-building as heroes try to apprehend escaped supervillains. The game is for three to five players, ages 14+, plays in around 90 to 120 minutes, and will carry an MSRP of $62.95 when it arrives early next year.

In Vigilante, you lead a team of heroes to fight back a swarm of villains running free in the city. Vigilante brings social deduction, action management, and tableau-building into a unique combination that leaves you with many different paths to take to accomplish your goals, new strategies and synergies between heroes, and a lot of tension!

There are a variety of scenarios (game modes) depending on player preferences. The game plays in rounds, where players have 4 actions to either fight (and imprison) villains, recruit new heroes, search for equipment and other helpful cards, or heal. Afterwards, players secretly roll their dice and contribute one of them, which sometimes will help the group but usually hinders them.

In Brought to Justice, each player gets a secret role. ‘Good’ players represent the majority and must imprison 7 villains per good player before the end of the game (i.e. if there are 2 Good players, they need a combined total of 14). ‘Evil’ players are trying to foil their plans, and Neutral players have independent missions which generally throw a little chaos into the mix.

Shifting Allegiances takes Brought to Justice and creates even more uncertainty by only guaranteeing one ‘Good’ player, while the rest of the mix could be any combination of ‘Good’, ‘Evil’, or ‘Neutral’ players. It’s possible that everyone can be playing cooperatively, but without being certain the tension might stand in your way!