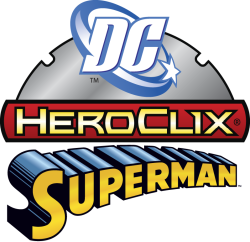 So, I’m talking about the Superman Expansion for Heroclix from WizKids, which is due to be released on September 28th.  And by sold out, I’m referring to the fact that the line has been sold out to distributers worldwide.  If you love Heroclix, and Superman, it behooves you to take a look.  Here’s the official info from WizKids, grain of salt not included:

The DC HeroClix: Superman expansion will feature more than 50 figures in standard five-figure boosters. Celebrating over 70 years of history, Superman brings all of the action and amazing power that only the Last Son of Krypton can deliver, and where Superman treads his greatest villains and allies cannot be far behind! Popular sub-themes in the set will include: All-Star Superman, the World of New Krypton, the Legion of Super Heroes, the exciting and pivotal Flashpoint mini-series and more!

“The growth of HeroClix in 2011 has been extraordinary,” said Lax Chandra, President of WizKids. “Sales for each set this year has outdone the last with Superman being our biggest release in many years. Despite the increase in our supply, retailers, retailers can’t keep the product on their shelves. We would like to thank all of our retail partners and customer base for their continued support.”