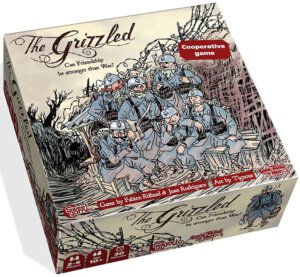 One card game which was generating a lot of buzz at Gen Con was the English translation of the French title Les Poilus. Entitled The Grizzled, released through Sweet November and Cool Mini or Not, players take on the role of French infantrymen in the trenches of WWI. The interesting wrinkle here is the players aren’t actively fighting but simply trying to survive the horrors of day to day existence in a war torn landscape.

The game’s tagline is “Can Friendship be stronger than War?” and players much cooperate to survive until peace is declared. If morale drops too low or any one player faces too many hardships everyone loses.

The Grizzled made it’s debut at Gen Con and is available at an MSRP of $20.