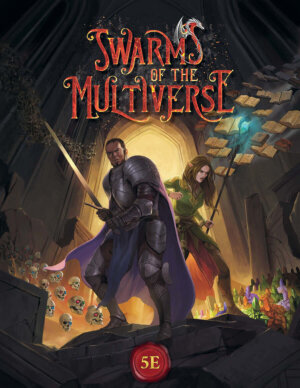 A new 5E D&D supplement has arrived from Splinterverse Media. In Swarms of the Multiverse, you’ll find over 70 new creatures (and their swarm versions) as well as magic items, demiplanes to explore, monster tactics to employ, and more. The 187 page tome is available from DriveThruRPG in hardcover (with PDF) for $39.99, softcover (with PDF) for $34.99, or in PDF alone for $19.99.

From the team that brought you the platinum-bestselling Feywild Companion, comes the next evolution in swarms!

This one-of-a-kind bestiary brings you never-before-seen creatures as well as their swarm equivalents. But these aren’t just run-of-the-mill swarms! Each creature has been given a minimum of two pages to help you understand their lore, their habits, their tactics, and why they swarm. Many of the swarms feature differences from their base creatures to keep your party guessing. Plus, we’ve got tons of bonus material and instructions on how to make swarms that are balanced for fifth edition.