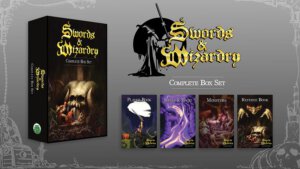 Fans of Old School Renaissance fantasy roleplaying are no doubt very familiar with the well regarded Swords & Wizardry rules system from Frog God Games. Now the company is aiming to release a box set due to public demand. The Swords & Wizardry Complete Box Set will include everything you need to dive into a game which values the players’ plans and ideas over a bunch of numbers on a character sheet. The project is over 450% funded and you can choose from either the limited edition box for a $50.00 pledge, or the collector’s edition (only 250 copies to be printed) for a $55.00 pledge, through March 5th. The expected delivery is this October.

After more than ten years of requests, we’re finally producing a boxed set for the Swords & Wizardry rules, the original ancestor of 5e. It’s a fast-playing, wild ride into the world of the fantastic, with the same depth of play as its later-edition brethren. A fantasy role-playing game with a distinct feel to it, different from later editions of the game … and now it comes in a box!

Swords & Wizardry is more than a re-statement of the original rules that gave rise to 5e. It is fast-playing, easy to start, and easy to learn by anyone. Swords and Wizardry is  a snapshot of the rules as they existed in 1978 right before “first edition” was released. The fifth edition game currently played, watched and beloved by millions is great fun, but the structure of the rules has changed over the course of editions, and there’s a unique feel to the earlier versions of the game which you may not have encountered before. 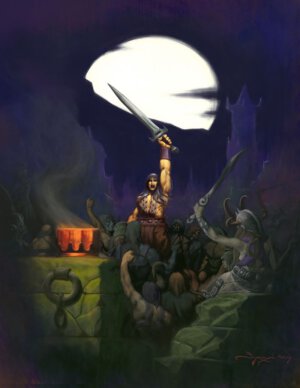 The rules in Swords & Wizardry are based on the original 1974 game, plus all of the supplements released from 1974 to 1978, articles in the Strategic Review and the Dragon magazine from that period, plus tips for house rules choices. The rules are organized in a more modern fashion than the original books, and are more accessible to those who started gaming after the 1970s.

These original rules are considerably different than the 5e version you may be familiar with. Here’s a quick run-down of how the “feel” of the game can be very different:
Character generation is very fast, and contains less detail (and fewer choices to make) about specific skills or tailored options.

Combat moves along quickly, and tactics are based on what the player describes doing rather than on anything listed on a character sheet.

In general, the “lighter” approach of these rules leads to certain effects on game play:

Swords & Wizardry is about “rulings” not “rules,” and a lot of players describe a test for whether it’s working well: when the Referee describes a situation and the players don’t immediately look down at their character sheets for their options, that’s when they’re in the “Original D&D Zone.”