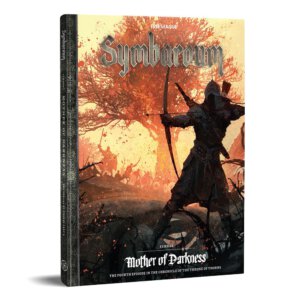 Free League Publishing has announced the fourth installment of the Chronicle of the Crown of Thorns campaign for the Symbaroum roleplaying game is set to arrive this month. Symbar – Mother of Darkness tasks the players will exploring the long ruined titular city as they mount an expedition to gain treasure and glory. You can preorder the hardcover from Free League for an MSRP of $37.62. I’ll guess the PDF will be available at DriveThruRPg for $19.99 when both the book and PDF arrive on January 28th.

Enter the vast Forest of Davokar on a hunt for treasure, lost wisdom and fame. “Mother of Darkness” is what the witches of the barbarian clans call the ruined city of Symbar, once the capital of the empire of Symbaroum. It has long been lost, but just recently its position has been pinpointed, triggering a rush of competing factions mounting expeditions in the hope of arriving there first. The journey will be long, the rivalry fierce and bloody, and none of the competitors truly know what to expect if they manage to reach the ruins alive.

Symbar – Mother of Darkness is the fourth installment of the epic Chronicle of the Crown of Thorns campaign for the award-winning Symbaroum tabletop roleplaying game. It is also a good starting point for players who have never played Symbaroum before – they can jump right into the action and head straight for the grand prize.
The lead artist for Symbar – Mother of Darkness is Martin Grip, known for his acclaimed work on the recently released work on the official ALIEN roleplaying game by Free League Publishing.