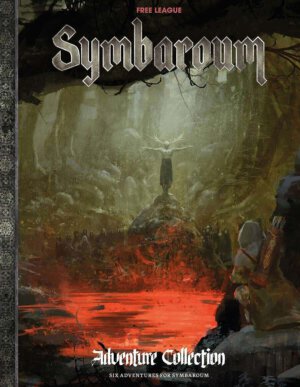 Free League Publishing has released a compilation of Symbaroum adventures. The Adventure Collection includes a trio of previously released titles. The 228 page hardcover carries an MSRP of $39.99 or grab the PDF from DriveThruRPG for $17.99.

A nation on the run. A homeland ravaged and barren. To stay in Alberetor would mean certain death; only fools and those who have vowed to die on their native soil would consider going back. Under these circumstances the people are truly blessed to have such an abundantly rich destination ahead – Ambria, the promised land of Queen Korinthia.

You are but one of many who have traveled across the snow-clad passes of the Titans. You have set foot in your new homeland, but there is still much to learn. The journey takes you to Thistle Hold, the town of explorers and treasure hunters bordering the great forest of Davokar. From there it continues out into the forest, brooding over ruins and powerful artifacts from the olden days of Symbaroum, and then back to face the escalating internal conflicts of the Queen’s people and realm.

The journey will undoubtedly transform you, make you regard the world and yourself with entirely new eyes. Provided, of course, that you reach the end of the road with eyes to see, a life left to live, and a mind not consumed by darkness…

The Symbaroum Adventure Collection assembles the content of three previously published products, featuring six adventures that demonstrate what different kinds of stories that may play out in the game world – forest expeditions, excavations of ancient ruins, political intrigues, even witch hunts and murder mysteries. So turn down the light, make the world around you disappear, and get ready to enter the wondrous world of Symbaroum.