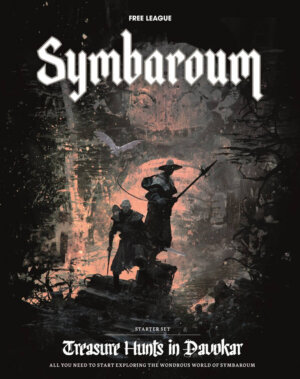 The popular dark fantasy roleplaying game Symbaroum is receiving a bowed starter set from Free League Publishing. Symbaroum Starter Set – Treasure Hunts will include both a rulebook and adventure book, two short introductory tales, dice, pregenerated characters, and more. The box set is arriving February 16th and will carry an MSRP of $39.99.

The long-lost artifact known as the Rod of Light and Darkness had a touch that could breathe life into dead things or steal it away from that which lived. In this very moment, the location of the artifact has been revealed, an opportunity that cannot be ignored. But it rests in an area known to treasure-hunters as a place where lightning rain burns flesh and shatters dreams…

The Symbaroum Starter Set – Treasure Hunts in Davokar is the perfect entry point to venture deep into the lush world and offers treasure hunts and expeditions in the mysterious forest. 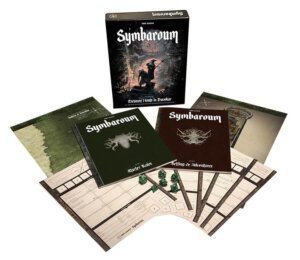 The Symbaroum Starter Set – Treasure Hunts in Davokar is written by Mattias Johnsson Haake and Mattias Lilja, with art by the critically acclaimed artist Martin Grip, all three co-creators of Symbaroum and also involved in writing, editing and illustrating for games such as Coriolis – The Third Horizon, Vaesen, Forbidden Lands and the official ALIEN RPG.