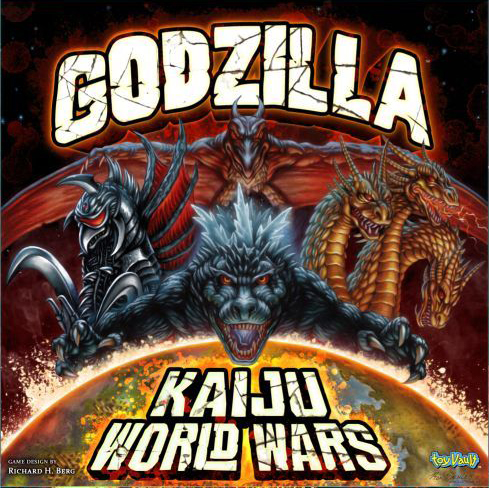 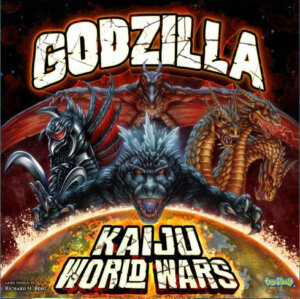 It’s time for fans of Japanese giant monster movies to rejoice as the grandaddy of all time, the big radioactive lizard himself, Godzilla prepares to make his way to your gaming table! Toy Vault Inc has announced the King of Monsters, as well as other Toho properties, will be smashing their way into your heart sometime in 2011 with Richard H. Berg’s Godzilla: Kaiju World Wars. Here’s what Toy Vault has revealed so far:

Toy Vault, Inc. is thrilled and excited to announce Godzilla: Kaiju World Wars; an officially licensed multi-player board game featuring the King of the Monsters – Godzilla!

It’s an all-out brawl of monstrous proportions and Earth is the battlefield!  The Xiliens have pitted Godzilla, Rodan, Gigan and King Ghidorah against each other in a catastrophic battle and only one monster will emerge victorious!

In Godzilla: Kaiju World Wars, players pick a monster and a scenario, stomping over terrain and destroying buildings on their warpath – all while fending off aggressive military attacks, bombs, traps and, of course, other KAIJU! Special abilities are used to eliminate the competition or to tuck their tail between their legs and run away before they are taken out.

The game is jam-packed with pieces sure to please any gamer. Along with the four fully painted 2 3/8 inch plastic Kaiju figurines, the game also includes 90 stackable plastic tiles for building skyscrapers, four individual monster playmats, 86 terrain and power tokens, and much more.  You’ve never had so much fun ravaging the world as you will when you play GODZILLA: KAIJU WORLD WARS!

Check out ToyVault.com in the coming weeks as we’ll be adding more product details, images, and ways you can submit your own custom game-play scenarios!

The following is an interview with Paul Blake, Toy Vault Game Developer, which I found at The Tokusatsu Eiga Times:

1. How long has Toy Vault owned a merchandise license pertaining towards Godzilla?

We started making Godzilla plush items in 2002, and have released new products continuously since then. Our first such product was a medium-sized plush Mothra, which many toy enthusiasts now consider a collectors’ item, but we’ve also made plush versions of most of the other Toho monsters, including Godzilla, Space Godzilla, Keizer Ghidorah, and Rodan.

2. With such licenses, what does Toy Vault want to provide for customers that may be “unique” in comparison to other companies also with a license (like Bandai America)?

Bandai America and other such companies tend to brand their Godzilla toys based around a strictly realistic interpretation of the character, which generally means rigid toys – Action figures, resin statues, plastic model kits, etc. However, as we had already learned with our Cthulhu line of plush toys, people want soft, huggable versions of giant creatures of destruction. Specifically regarding our Godzilla games, we wanted to provide customers with Godzilla games which would actually appeal to gamers as well as Godzilla fans, rather than being the kind of hastily-thrown-together roll-and-move type games normally associated with media licenses.

3. Who’s idea was it to make a kaiju board game?

It would be hard to nail down a single person as saying “We need to make a Godzilla board game,” and that statement then causing us to move forward with it. Jon Huston (Senior Creative Designer and part owner of the company) is a lifelong avid gamer, and has long wished to move ToyVault into the gaming market. It wasn’t until recently that this became economically feasible. Prior to my involvement with ToyVault, I was already friends with Jon, and we would frequently discuss what was going on with the company. As he had already produced several Godzilla-licensed products, it seemed a fairly obvious choice.

4. Where did the inspiration for such a product come from?

This somewhat depends on which product you’re asking about: Currently, we have two Godzilla-themed tabletop games in development. The one you are aware of, Kaiju World Wars, was designed by Richard H. Berg, who has been designing tabletop games since the 1970s. Mr. Berg would probably be the best person to answer questions about his original inspiration for the game, but I recognize elements from other similar genre game, some modern, some dating back to the 1970s and 1980s.Of course, citing direct inspiration for a game mechanic or design element would be like citing creative inspiration for every character in a novel – similarities are likely to occur in similar genres.The other Godzilla product we’re working on is a card game called “Godzilla: Stomp.” It’s a quick filler game for 2-5 players. When it was originally shown to us, it was graphically themed around herding sheep, of all things. Based on what was going on in the game, however, it quickly became obvious that the best fit for it in our product lineup would be as a Godzilla-themed game, and the graphic redesign was fairly obvious and straightforward. The basic gist is that the players are each trying to destroy the highest point values in buildings over the course of the game. In order to do that, they need to carefully time when to use each of their attacks, and when to try to go on a rampage for more points. It’s somewhere between trick taking, bluffing, and set collecting.

5. Some have compared what the game looks like now to Monsterpocalypse. What will be the main differences between Monsterpocalypse and this, “Godzilla: Kaiju World Wars”?

The biggest and most obvious difference is that Kaiju World Wars is intended as a standalone product. While we are open to the idea of doing expansions in the future, the Kaiju World Wars product line will never involve random distribution of components.

6. How tall will the figures of the kaiju be? Some are wondering if similar-sized products like Bandai Japan’s Hyper figures could be, with a little imagination, compatible with the game.

The individual figures vary in exact height, but they range from 2 inches to 2.5 inches.

7. What can we expect from this game? What can you tell me about it that hasn’t already been said on site pages such as this: http://www.boardgamegeek.com/boardgame/38694/godzilla

Our biggest goal with Kaiju World Wars was flexibility. We wanted this game to scale to several levels of complexity, from a simpler, introductory game, all the way up to a more complex game for seasoned gamers. The game is scenario based, which means players can try several different setups and victory conditions, or they can create their own scenario. The game can play very quickly, but if the players want, it can get quite epic.As an example, one of the included scenarios takes place after an already devastating three-way battle between Gigan, Rodan, and Godzilla. These three monsters have already taken significant damage, and the city around them is a wreck. Then King Ghidorah appears, fully powered up, ready to take on all three of them.

We also wanted players to be able to simulate a wide variety of cityscapes, so the game will include lots of stackable plastic building tiles, as well as tokens for parks and ponds, all of which can have various in-game effects. We’ve even included two basic game “modes” for combat: In Basic Combat, each Monster basically has two attacks – ranged and melee. In Advanced Combat, the Monsters have a much wider array of attacks available to them, and the various attacks can do a lot more than just directly injuring another monster.

8. What are the projected sales numbers for the game?

As much as possible. Pinpointing an exact figure would be a voodoo science, at best, but we’re anticipating going through multiple production runs and supporting the product for years to come.

9. How will advertising be executed and will major stores like ToysRUs carry the game?

Our primary route for advertising the game will be online – for instance, through banner ads. As for major stores, we can’t really speak for them. Our products have been carried in mass market stores in the past, but the vast majority of our product sales come from online stores like ThinkGeek or Troll & Toad, or brick-and-mortar comic and game stores.However, based on the nature of both Kaiju World Wars and Stomp, we would be a little surprised if they didn’t show up in larger chain stores.

10. Any other words from you and other members of the creative team?

I’m looking forward to what Toy Vault has up their sleeves with Godzilla: Kaiju World Wars and, with designer Berg onboard, this should turn out to be a solid effort! 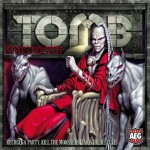 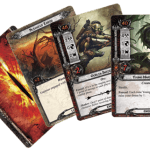