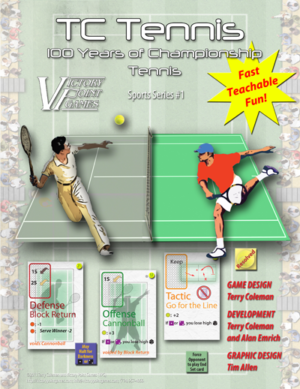 As we mentioned in our last show, Victory Point Games is jumping into the sports game arena with TC Tennis! Obviously the “TC” stands for designer Terry Coleman. From what I’ve seen of the components it looks like an interesting title with more strategic planning paving the way to victory as opposed to just rolling endless numbers of dice and consulting charts. Originally I didn’t think there would be actual real life players included in the game but, as you can see by the info straight from VPG, I was wrong. Not the first time I’ve guessed wrong regarding a game…

So here’s a look!

Players: 2
Ages: 10 and up
Playing Time: approximately 45 to 90 minutes
Complexity: 3 on a 9 scale
Solitaire Suitability: 6 on a 9 scale
Unit scale: Individual tennis players

Because TC Tennis is establishing the template for a new line of VPG Sports Games, under Series Developer Terry Coleman himself, creating the presentation style, proper rules “voice,” and marketing concepts means plowing up a lot of new ground. This has put everyone on this project to the test, as we are fanatically trying to get all of the details right for this new game series debut.

To do a “first” correctly, about a million things have to go right. When you are preparing to release a game that has not only one “first,” or even two, but three “firsts,” about a zillion things have to go right! TC Tennis is all that and a can of tennis balls. To start with, it is the first game design published by VPG’s own vaunted Operations Manager, Terry “TC” Coleman. Now, TC has been around the track many times over the years working in the game industry, but this boardgame is something very special to him, and when designers lavish that much love and attention to detail, the passion shows in the finished product. is also a first in that it is our first game where Tim Allen is doing the graphics from cover-to-cover. Not just the map, not just the cards… but everything. TC Tennis sports a comprehensive, coordinated Tim Allen look and we’re very pleased with what he has done with it.

And as our loyal readers know, TC Tennis is also our first sports boardgame. For those not familiar with sport boardgaming, this is a very specialized corner of the hobby for us to enter, and we needed a “first” that met several specific criteria. In addition to fitting our VPG format, we sought a game on a less-covered sport that hard core sports boardgamers would enjoy; we want them to be able to use this game as an introduction to their non-sports boardgaming friends and get them to try the sports boardgaming hobby. Our first sports boardgame needed to be smooth, nuanced, plus combine a good look-and-feel with a brisk cadence and plenty of opportunity for player decisions to matter. Overall, it had to be a fresh take from a “new publisher” in the arena of sports boardgames if it was going to make any kind of splash among both the hard core and casual market for the game. We’re confident that TC Tennis delivers all that.

Designer Terry Coleman has served up VPG’s first ever sports strategy game, TC Tennis. Choose from 24 of the greatest tennis champions in history and pit them against each other in a fun, fast-paced game that isn’t packed full of tables and charts. Instead, the entire game is designed to get you thinking about strategy right from the first strike of the ball. Each player in the game is rated for various Strokes such as 1st Serve, Backhand, Forehand Volley and Touch, from a low of F (a terrible shot for a pro player), to AA (one of the legendary Strokes in tennis history). Play Strategy cards to increase your scoring chances, defend against your opponent’s Strokes, or try a variety of Tactics (Crowd the Net, Pick up the Pace, etc.) to shake things up.

The fun comes not only from the wide variety of Strategy cards in play at any particular time, but also from the effects different cards have on each other. Do you risk hitting a Cannonball Serve, knowing that your opponent might have secretly played a card that negates it? Can you keep using Go for the Lines as a Tactic, knowing that you might miss, and hurt your scoring chances? And depending on which players are involved, the strategic decisions each set only multiply. As you master the Basic game and move on to the Intermediate and Advanced games, we add the possibility of a Set ending earlier, more Random Events, Tiebreakers, and even Fatigue and Injuries, for those who want more realism, without much increase in complexity.

Stage your own tournaments, find out which courts best fit your style, and serve up some of the greatest Strokes the world has ever seen! Will you lead your favorite players to victory? Put the ball in your court with TC Tennis!

This is shaping up to be a big departure from the norm from VPG and I can honestly say I’m eagerly looking forward to checking this out so look for a review within the next couple of weeks!

As of today, the game is available for order and retails for $34.95 but if you act fast you can purchase direct from VPG and pick TC Tennis up for $29.95!