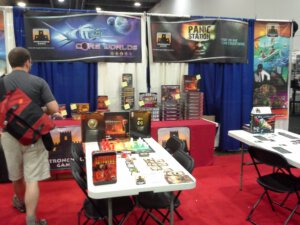 Welcome to another Edition of The Gaming Gang Extra: Origins 2012 Raw. This time around Jeff and Elliott are talking with Stephen Buonocore from Stronghold Games. Stephen will talk about the Core Worlds expansion: Galactic Orders and their new releases Lost Temple and Revolver. Plus we’ll hear about news of Revolver 2 and the Survive 30th Anniversary Edition which is now available.

And don’t forget, The Gaming Gang podcast is on iTunes.

Also add the podcast feed to your favorite aggregator or app with this link.

The ancient Galactic Realm, ruled from the Core Worlds of the galaxy, is waning. Now, the barbaric kingdoms that lie beyond the galactic frontier are amassing their strength, choosing this pivotal moment to strike at the heart of the fading republic, establishing new empires built upon the ashes of decaying civilizations. But these outer systems are not yet strong enough to engage the forces of the Core Worlds directly. The young kingdoms must first gnaw at the edges of the crumbling frontier, developing new types of units and shrewder tactics. They must build up their energy resources to launch magnificent fleets and overwhelming ground forces. Then, when the time is right, they must strike at the galactic core itself, claiming the most exalted planets for themselves. The barbarian kingdom that achieves these goals will carve out the greatest empire in the galaxy… and rule the Core Worlds!

Each player controls a barbarian Star Empire represented by many cards. Throughout the game, players will invade Worlds and draft new Units and Tactics into their Empires. Each card lists its Empire Points in the upper right corner. The player whose Empire contains the most Empire Points at the end of the game is the winner!

Core Worlds: Galactic Orders is the highly anticipated first expansion to the one of the galaxy’s hottest new deck-building games!

These Orders were represented in the base set of Core Worlds by the six Prestige Cards: the Galactic Senate, the Science Guild, the Merchant Alliance, the Mining Coalition, the Order of Knighthood, and the Mystic Brotherhood.  The Core Worlds: Galactic Orders expansion focuses on these six independent organizations and their influence upon a galaxy at war.

Many players noted the enigmatic icons on many of their Units and Tactics cards in the base set of Core Worlds, and the rulebook mentioned that these would be used in future expansions. Well, this is the first expansion to use them! Each Galactic Order is represented on the table by a large Galactic Order Card that specifies the special power associated with that Order, and each player starts with 20 Faction Tokens that match the Faction symbols on their Starting Decks.

1927…Several explorers are searching in the dense jungle of South-East Asia for a mysterious temple. To find it, they must cross the jungle and get help from the indigenous people. Players will seek help from the local villagers – nine friendly characters – whose abilities will be quite useful. Players can also try to outwit the others on the journey to reach the temple first.

The first player to reach the temple wins the game!

Bruno Faidutti has created his follow-up board game to the best-selling “Citadels™”. In Lost Temple, players use character selection similar to the classic game “Citadels™”.  Here, Bruno has created these nine soon-to-be-classic roles to help you make your way to The Lost Temple: Shaman, Thief, Seer, Priest, Elder, Craftsman, Scout, Canoe, and Child.

And Bruno has transformed the game into a “race” game.  Will you be the first to find The Lost Temple?

The year is 1892. The bank at Repentance Springs has been robbed. Many good citizens, including Sheriff Anton Dreyfus and school-marm Sue Daggett, were brutally slain as the gang shot its way, whooping and holering, out of town.

Colonel Ned McReady and his men are tasked with bringing Jack Colty – a man so mean he”d steal a fly from a blind spider, or a coin off a dead man”s eyes – and the Colty gang to justice.

Revolver is a non-collectible card game set in the Old West.  One player takes the role of Colonel Ned McReady and his lawmen, and his opponent assumes control of the notorious and deadly Colty gang, lead by the infamous Jack Colty.  Each player has his own dieck with different cards and abilities.  Both players have different goals to win the game: the Colonel must take down all of the Colty gang, and Jack must either escape over the Mexican Border or survive and make the 3:15 Train out of Rattlesnake Station during the final battle!

Consisting of two unique, yet balanced, 62 card decks, the game pits two players against each other in a life or death struggle.

Do you (as Colonel Ned McReady) have what it takes to bring Jack Colty and his gang to justice (or to their demise)?

OR, are you (as Jack Colty) mean enough to shoot down the rest of the lawmen and survive the day just to rob and pillage again?

t’s early in the 20th century – a time of exploration and adventure. The mysterious island of Atlantis has been discovered in the middle of the ocean, and there are rumors of great riches to be found there! After reaching Atlantis, the explorers are ready to return home with treasure and artifacts. But Atlantis begins to sink!

In a panic, the adventurers try to avoid a terrible fate.  The luckiest will find a boat to return home while the less fortunate will have to try to swim for it.  But nobody will be safe from the Sea Monsters, Whales, and Sharks that live in the ocean around Atlantis!

Who will reach dry land with their riches?  Who will Survive!?

“Survive: Escape From Atlantis!” is our best selling game!  Gamers and families have spoken! “Survive!” is a great light-strategy game for serious gamers, as well as a fun game to play with the family!  Over 1.25 million copies have been sold since it was first published 30 years ago!

This is a true classic, and now brought back by Stronghold Games with completely upgraded components, and now in a 30th Anniversary Edition!