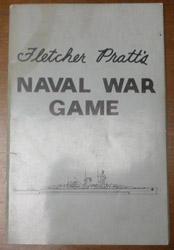 One of the earliest games that I began to play, outside of D&D, was Fletcher Pratt’s Naval War Game. It was freshman year and I was attending Lane Tech High School in Chicago. A few weeks into my high school career my new best friend, Elliott Miller – still my best friend nearly 30 years later – and I were looking at a club to join. We both liked games and we had heard about two game clubs at school. One was called the Gamer’s Guild and the other, well, I don’t actually recall what the name of the other club was anymore. So Elliott and I along with our other new friends (Scott Weigel, Darryl Meltzer, Tim Felan, Peter Bonafete as well as others whose names are lost from my memory) checked out the two clubs. The nameless club seemed to only be about Dungeons and Dragons while the Gamers Guild was involved in all different genres and interests.

All of us decided to join the Guild!

One of the games I was introduced to in the Guild was Fletcher’s, as we soon called it. As I remember it, and I might be completely wrong, it was either Scott or Tim who introduced the game. I really think it was Scott to be honest. Our first Guild game of Fletcher’s was the hunt to sink the German battleship Bismarck. We used the board from the old Avalon Hill classic Bismarck to track the naval movement and then Fletcher’s to resolve the combat. As the we began the game, the Germans (I was commanding the Bismarck) had both the battlecruisers Gneisenau and Scharnhorst added into the mix. Scott was moderating the game and, as we finished up the first Guild meeting devoted to sinking the Bismarck, we had two periods totalling about 80 minutes or so after school twice a week, the British and Germans met up on the high seas. In reality I think Scott got tired of both sides stumbling and bumbling around and decided it was time to just get the rumble started.

The Royal Navy had the Kriegsmarine outnumbered but maybe not outgunned. The opening salvos were about to be fired and the day would be won by the biggest guns and the best gunnery! How did it turn out? I’ll get to that in a minute…

Let’s start with asking who Fletcher Pratt was. For most people, Mr. Pratt was a fantasy author who was pals with L. Sprague de Camp. I think it’s a bit funny that Pratt is a sort of side note to de Camp these days when Pratt was a very well established author in his own right. He was very respected naval historian, and military expert in general, as well as the founder of The Civil War Round Table of New York. Following his death in 1956, the Round Table’s board of directors established the Fletcher Pratt Award in his honor, which is presented every May to the author or editor of the best non-fiction book on the American Civil War published during the preceding calendar year.

Sounds like a pretty stuffy sort of guy so far? Well, not really.

Back in 1929, “bored with seven-card stud, backgammon and craps” he got together with some friends and created a naval game. Building on naval enthusiast and analyst Fred T. Jane’s (of Jane’s Warships fame) own set of rules published in 1898, Pratt came up with a set of rules for depicting naval actions with the use of model ships or miniatures.

Here are a couple of interesting links about the popularity of Pratt’s game back in the day:

Check out these two older articles from Life magazine in 1938 and 1941. I kind of laugh when I read the ’41 article because it really shows that the art of role playing has been around a lot longer than most of us imagine. Empress Katherine doesn’t seem too excited does she?

Not to get too deeply into the mechanics of Fletcher’s, I’ll point out two aspects of the game that struck me then and still appeal to me now. The first is the range finding. Now granted you’re looking at using models that are around 1/1200 scale (one foot equals 1200 feet for scale) so many of your cruisers clock in around seven inches or so, which would drain your wallet in no time, and you’d need a huge empty room to play the “large floor” scale but when you’re playing a naval game set in a pre-radar, pre-fire control era the reality of figuring out just how far away you are from your target is realistic. The gunnery control of late 19th and early 20th century navies was all about eyeballing it and you’re forced to do so as well.

If you’re not the sort of person who can effectively figure that the first knuckle of your index finger to your second knuckle is around an inch you would get creamed playing Fletcher’s!

The second mechanic that I always dug was the step reduction. If you’ve ever played Star Fleet Battles (Wow! Another classic we’ll discuss in the future) you understand that, as your ship continues to get hammered, the more damage you’re taking the worse off your ship will be. As opposed to games you would play back in the day where if some unit lost the battle you’d just take it off the board. I think this was the first game where you could have the odds stacked against you but could still throw out some flaming death before you sank beneath the waves.

For those who aren’t familiar with “step reduction” it’s basically the concept that as you take damage (almost a role playing concept these days) the more difficult it becomes to defend yourself and to deal out damage to your attackers. You might begin commanding a battleship mounting twelve guns, cruising along at 24 knots, with four torpedo tubes and as you receive damage from incoming fire you lose guns, speed, and torpedo tubes. For a set of rules developed in the late 1920s it still had some legs when we began playing in the early 1980s. But that didn’t mean it didn’t have problems…

Armor penetration was almost incomprehensible – following the chart left you scratching your head half the time wondering if the shells punched through the armor or not – and you better have a calculator on hand to tally up the damage you took at the end of the round. We wouldn’t use the firing arrows concept much either because, as easy as it may sound to just point at something 12 feet away, the reality is that it’s much harder to pull off than you think. If you were off just a tiny bit you find your salvo veered to the left or right by a staggering amount.

The torpedo rules, a standard in any naval wargame setting beyond the American Civil War, were practically unplayable. Once someone laid down a spread of torpedoes we knew the game was going to come to a screeching halt. We won’t even discuss the aircraft rules. I can’t believe we actually played some games, as well as a Midway campaign, using the aircraft rules from the 1973 reprint. Can you imagine taking the time to resolve each and every plane attack during the battle of Midway as you play games today? That would be insanity!!! Yet that’s what we did in Tim’s basement one weekend. 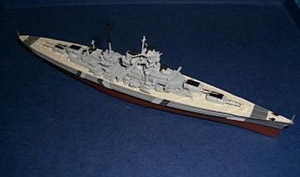 Hey! We were kids! What did we know?

Yet having played or run games using Seekreig, General Quarters, the Avalanche Press line, as well as countless others for almost thirty years, I’m always drawn back to Fletcher Pratt’s Naval War Game. The game is far from perfect especially for most modern gamers but there’s just something about Fletcher’s that always draws me in. Maybe it’s because the fate of your ships is always in your hands with little luck and no dice rolls coming into play. Or it could be that it simulates the naval period from 1890-1940, before the torpedo was perfected and the airplane reigned supreme, pretty well. Then again it might just be all the great memories I have of battling it out with friends and strangers alike across countless bare floors.

So how did that search for the Bismarck turn out? 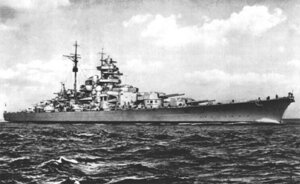 As we ended the first gaming session the Germans were pounding away at the British fleet while sustaining very light damage. If memory serves we sent the Hood to the bottom early on. As we finished up the day we marked the ship positions with little pieces of masking tape and put all the desks back in order. Boy we all hoped that those little marks of tape would still be there two days later! I missed the second club meeting – I think I was out sick or something so I wasn’t at school – and the person who took over the Bismarck wasn’t able to hit the broadside of a barn and the Royal Navy players had their gunnery down pat so when we played again for the third and last time the German behemoth was in dire straits. With only a few remaining guns and only able to mount a few knots of speed the battlewagon fought on.

The British players paid a much stiffer price than the Royal Navy did during the battle but, in the end, the mighty Bismarck slipped beneath the waves. Just as her historical counterpart did decades before.

Nominees for the 2020 Origins Awards are Revealed

La Résistance – First Look and How to Play