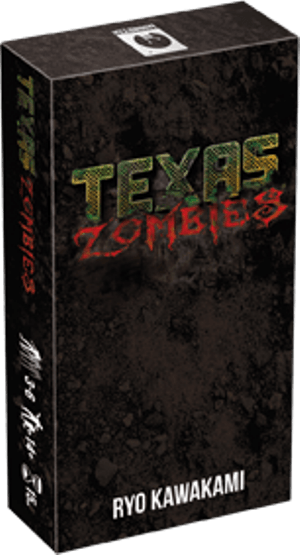 The news from Asmodee is that we can expect to see the new Texas Zombies game from Moonster Games by the end of the month.

Finally, after a couple of months of delay, it is this month (well, maybe by the end of the month actually) that TEXAS ZOMBIES will be released. The game will also be available within 2 months in the USA and also in Japan. The first Horror Party Game for any zombie hunter worthy of the name! The game has been shown in Cannes, last February, and was greeted by a public way larger than what we expected, games were played non stop over 3 days and most of the participants have been zombified in real time by Master Ian Parovel.

A group of students from a Texas University goes in a former military facility in the middle of the desert. A field trip like many others… until they reach their destination.

The base has become the main hideout of a Mexican drug cartel, which employs a cheap and reckless task force : zombies !

Stuck with those living and undead foes, and not to mention other abominations lost in this forsaken place, will you survive ?

Texas Zombies is an alternate take to Cat & Chocolate, a Japanese party game designed by Ryo Kawakami, where players evolve in a haunted manor filled with ghosts and spirits. We liked the concept, and we worked on a European and US version of the game. And for us, it takes place in Texas, with zombies, drug dealers, and monsters !

During the game, players get to face random events, as wicked as hazardous, and will try to survive, relying on their ingenuity and the few objects at their disposal.