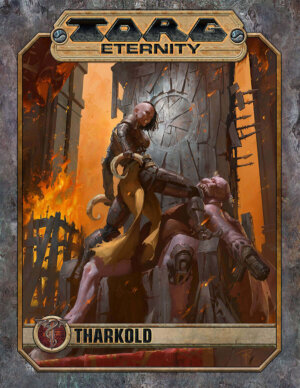 Ulisses Spiele has released the latest TORG Eternity sourcebook. The Tharkhold Sourcebook takes the Storm Knights to the hellscape of demon infested Russia. The 146 page PDF is available through DriveThruRPG for $19.99.

THIS IS GOING TO HURT…

Tharkold is a literal Hell on Earth. Long ago demons crushed the humans of the cosm in a world shattering war that left both civilizations in ruins. Now the demons, bolstered by occult technology and seeking new realities to plunder, have turned their eyes upon Core Earth.

Tharkold invaded Russia, but President Alexander “The Wolf” Volkov seemed ready for them. An uncomfortable detente fell over a realm ravaged by madness, radiation, and demonic abominations.

Now the status quo has been upended once again with the death of High Lord Kranod. Kranod‘s henchwoman, The Wolf, and a scheming demon with mysterious ties to the Gaunt Man now race to extend their control over the realm.

You play the heroes of this gritty, blood-soaked realm. Freedom fighters, criminals, renegade pyschics, and even the rare demon attempting to overcome their evil origins and change the blasted landscape for the better.

• New Perks, Spells, Psychic Powers, and Occultech for players.
• New threats and foes to encounter, including battling the harsh environment itself.
• Details of the major factions within Tharkold and the regions they control.
• Plot hooks and events from the first year of the Possibility Wars.