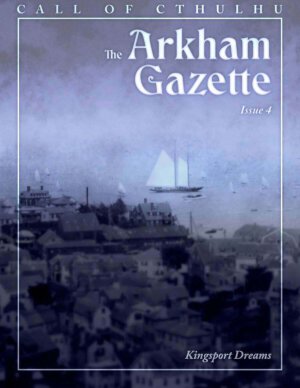 Sentinel Hill Press has released the latest issue of The Arkham Gazette featuring loads of Call of Cthulhu roleplaying content. Issue four focuses on Kingsport, the fog shrouded port town of legend, located in Lovecraft Country. You can score the 121 page Gazette in softcover (with PDF) for $19.99 or in PDF alone for $14.99 at DriveThruRPG.

Then beyond the hill’s crest I saw Kingsport outspread frostily in the gloaming; snowy Kingsport with its ancient vanes and steeples, ridgepoles and chimney-pots, wharves and small bridges, willow-trees and graveyards; endless labyrinths of steep, narrow, crooked streets, and dizzy church-crowned central peak that time durst not touch; ceaseless mazes of colonial houses piled and scattered at all angles and levels like a child’s disordered blocks…

Welcome to Kingsport! Our long-promised fourth full issue, which we have dubbed “Kingsport: Dreams” has arrived at last. Within these pages we explore some of the mysteries of this fog-draped sleepy village of legend. From the wave-lapped rocks of Pilot Island, to the barnacle-crusted pilings of the dockside, through the crooked lanes and alleys, and spiraling up to the summit of Kingsport Head, Kingsport beckons you.

(Our next issue will continue our exploration of Kingsport in “Kingsport: Visions and Nightmares”.)

Achtung! Cthulhu 2D20: Operation Snowstorm is Out in PDF

Conan Adventures in an Age Undreamed Of: The Shadow of the Sorcerer Hardcover Arrives This Week