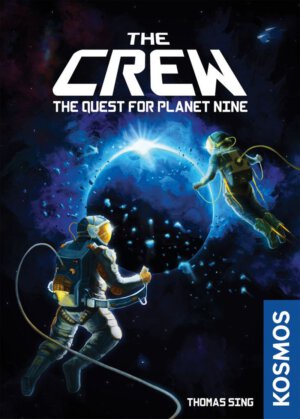 Following a successful release in German, the co-operative science fiction card game The Crew: Quest for Planet Nine will be arriving in English. In the trick-taking game, published by KOSMOS, players will actually play across a series of 50 missions (hands) in order to complete individual goals. The game is for two to five players, ages 10+, and plays in around 20 minutes. No word on a specific release date but The Crew will carry an MSRP of $14.95. It has been noted this release will feature better card stock than the German language edition.

Astronauts wanted! Scientists say there is a mysterious ninth planet located at the edge of our solar system. But despite all of their efforts, so far they have been unable to provide substantial evidence of its existence. Join this exciting space adventure to find out if the theories are just science fiction or if you will discover Planet Nine.

In this card game you need to complete 50 different missions as you travel across the solar system. But you will only succeed if you can work together as a team.

To master the challenges and achieve your mission, communication will be essential — but in space, things can be more challenging than expected…

The team wins only if every single player is successful in fulfilling their tasks.