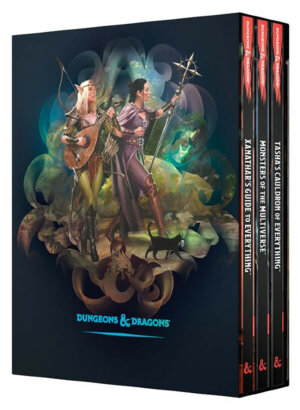 Later this month sees the Dungeons & Dragons Rules Expansion Gift Set arrive from Wizards of the Coast. The slipcase contains Xanathar’s Guide to Everything, Tasha’s Cauldron of Everything, Monsters of the Multiverse, and a DM’s screen. The three volume slipcase set will arrive January 25th carrying an MSRP of $169.95. A special edition with alternate art will be available at you FLGS too.

Embark on a journey with the rival wizards Tasha and Mordenkainen and the crime lord Xanathar. Learn new secrets and discover magical new ways to play the world’s greatest roleplaying game. Crafted for DMs and players alike, this collection brings together all the fifth edition rules expansion books in one set, complete with a beautiful new Dungeon Master’s screen.