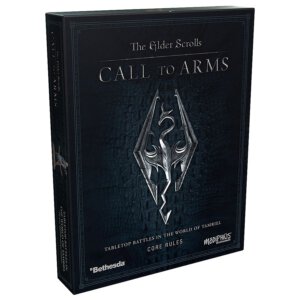 Bethesda Game Studios and Modiphius Entertainment are preparing to release The Elder Scrolls: Call to Arms core rules and first wave of miniatures in early 2020. The initial releases include the core rules box set and a trio of miniature boxes: Imperial Legion, The Stormcloaks, and Bleak Falls Barrow. Look for the game and miniatures to arrive next March.

It is the time of the Dragonborn. Battle rages across the forests, plains, and mountains of Skyrim as Imperials and Stormcloaks fight for supremacy. In ancient barrows, the restless dead rise from their sleep. Skeletons and fearsome Draugr jealously guard their treasures from bands of delving adventures.

Elder Scrolls: Call to Arms is an adventure wargame set in the world of Tamriel. Gather your heroes and venture into Draugr-haunted tombs and ruins, searching for treasure and glory. Or fight the Civil War as the Stormcloaks and Imperials battle for the future of Skyrim.

This Core Rules set contains all the rules you need for exciting solo and cooperative delves or for two-player battles with AI adversaries hindering both players. Begin your adventures in Tamriel with this essential boxed set. It contains the full rules of The Elder Scrolls: Call to Arms plus the dice and tokens required. MSRP $45.00

Protect Tamriel and the Third Empire from your enemies with the staunch heroes of the Imperial Legion. Hadvar provides leadership and tactical expertise to the Legion Troops and is supported by the Imperial Mage, whose expertise with magic and weapons makes her deadly at range and up close. Finally, three Imperial Swordsmen provide a stalwart backbone for your force. MSRP $33.00

Take back your homeland with the Heroes of the Stormcloak Rebellion. The true sons of Skyrim are led by the terrifying Yrsarald Thrice Pierced and Ralof, who stalks the field with bow and axe. Both are supported by three hard-hitting Stormcloak Soldiers with Greatswords. MSRP $33.00 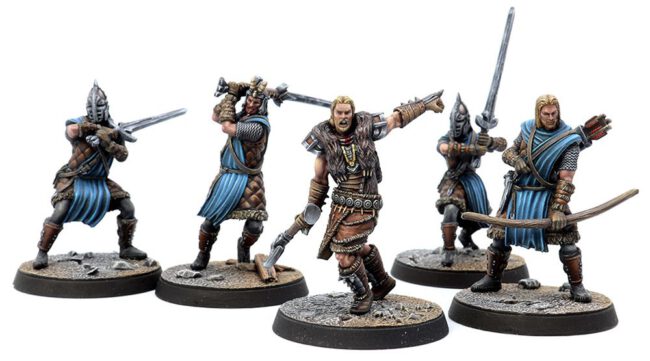 Explore the world of Elder Scrolls, as the Dhovakin faces the undead keepers of forgotten tombs and ruins. The Dragonborn delves into ancient Nord barrows and caves, equipped with her iconic weapons and armor. The Dragonborn is opposed by the deathless Draugr Warriors with Greatswords and creaking Skeleton Archers. These forces are led by one of the Dragonborn’s most fearsome enemies, the Draugr Overlord, who jealously guards the secrets of his resting place. MSRP $36.00