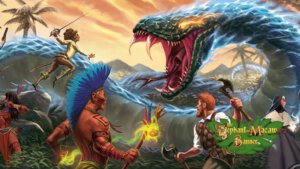 The popular Brazilian fiction series The Elephant and Macaw Banner has an RPG and now there’s a Kickstarter, from Porcupine Publishing, to translate the game into English. It appears the system is relatively rules light and promises plenty of unique 16th Century fantasy adventuring. Currently you can reserve a copy of English language edition of The Elephant and Macaw Banner RPG in PDF for a $20.00 pledge, or score the physical book and PDF for a $36.00 pledge, through February 29th. Expected delivery of the PDF is this May with the softcover book to follow in June.

There’s also a free player’s guide available to give you an idea about the game system itself.

Welcome to a world of muskets and magic!

The Elephant & Macaw Banner is an award-winning fiction series about the adventures of the Dutchman Gerard van Oost and the Yoruba Oludara during their travels through a fantastic version of sixteenth-century Brazil. These stories, steeped in Brazilian history and folklore, have been enjoyed by readers around the globe. (And you can find out all about them at the official Elephant & Macaw Banner website.)

Now it’s time to immerse yourself in this Brazilian fantasy, full of adventure, magic and monsters, where you’ll 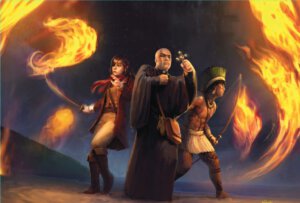 find endless opportunity to create new stories. It is with great pride that we present The Elephant & Macaw Banner Roleplaying Game. Create your own heroes and have your own adventures in this magical world!

The Elephant & Macaw Banner core rulebook is a 224-page, full-colour 11″ x 8.5″ softcover. It will be printed in the United States by Bang Printing of Minnesota.

There are no character attributes in EAMB – only skills, which you can develop to three levels: Apprentice, Practitioner and Master. They range from general skills like horse-riding or swimming, to more specialized training in things like navigation, music, weapons, academia and languages. You gain learning points over the course of your adventures that you can spend on improving any skill.

When a player wants to use their character’s skill to resolve a challenging or risky situation, the outcome s not certain, and something serious is on the line, we call this a feat. You attempt a feat by rolling three six-sided dice, adding a bonus for your skill level (and sometimes equipment) and seeing if it meets the target number: typically 12 for an easy feat.