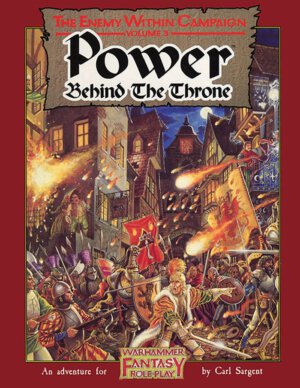 My pals at Cubicle 7 Entertainment continue to roll out classic adventures for their first edition of Warhammer Fantasy Roleplay  (I can’t wait to see the upcoming 4th edition!) and the latest installment in The Enemy Within is available once again. The third part of the highly regarded WHFRP campaign, Power Behind the Throne, can currently be had in PDF only. You can snag the adventure for $9.99 from DriveThruRPG.

Intrigue, Corruption and Death in the great city of Middenheim!

Refugees fleeing town, ridiculous taxes, priests of Ulric and Sigmar fighting in the streets, and rumours of beasts in the sewers – something is very wrong in the City of Middenheim. In the confusion of the city’s carnival, only the cunning and the brave will be able to cut away a web of conspiracy and aristocrats with secrets to hide, to uncover the hand behind a plot to control the city itself. Or there will be death, and hell to pay for it.

A small Reikland village is savagely attacked, and the hand of Chaos tightens around the greatest City State in the Empire. The adventurers face their greatest challenge yet as they find themselves in a net of violence, deceit and betrayal. They must use diplomacy and negotiation as well their weapons and magic to work out what is threatening the city – and who or what is behind it all. But they must be vigilant: the minions of Chaos will stop at nothing to destroy those who oppose them.

Power behind the Throne is the third adventure in the epic The Enemy Within campaign, set in the city of Middenheim (as described in Middenheim: City of Chaos). It comes complete with maps and hand-outs, plus reference notes on 22 major NPCs, and also contains details of carnival events for adventurers to enjoys, from aristocratic garden parties to vicious minotaur fights. It can be played as a stand-alone adventure.

This edition of Power Behind the Throne includes ‘Carrion Up the Reik’, a prologue to the main adventure, and an additional chapter of the Enemy Within campaign, which adds background, challenge and depth to this classic Warhammer FRP supplement.

This PDF reissues the Hogshead Publishing Edition of the Power Behind the Throne book. We’ve painstakingly scanned every page, and created a PDF that maintains the appearance of the original. This does make for a slightly larger file than we’d normally produce, but on this occasion, we think it’s worth it for all the great First Edition feel! The PDF is also bookmarked for ease of reference.