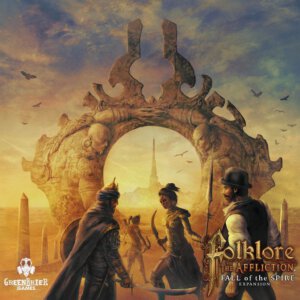 The latest Greenbrier Games expansion for the DM-less dark fantasy, RPG-ish board game Folklore: The Affliction (which I really like a lot) is currently up for crowdfunding on Kickstarter. The Fall of the Spire includes a half dozen new tales for gamers to explore and rules tweaks while also providing, as an add on, an opportunity to score not only new miniatures but an entire set of all previously released minis as well. The game is for one to five players, ages 14+, and usually plays in 60-90 minutes per adventure chapter. The project is already 1000% funded and you can reserve a copy of the expansion, and stretch goals, for a $60.00 pledge or grab the expansion, all stretch goals, as well as every miniature which have been released for the game for a $180.00 pledge through April 18th. Delivery is expected in December of 2020.

This Kickstarter is for an expansion of Folklore: The Affliction, an immersive dark fantasy cooperative adventure. In this expansion, Fall of the Spire, your characters will continue the adventure through a series of stories in their quest to rid the land of evil. Advanced combat, and Town Events will make even the return trip to civilization more perilous. In addition, the Creature Crate, a Kickstarter Bonus, allows you to store all the miniatures from this campaign and previous ones!

If you already own the core game, but are ready to delve deeper into the darkness, the “Squire” pledge level contains six full-length stories, and the “Executioner” has both the 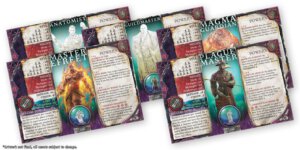 expansion and the new miniatures along with a Kickstarter bonus full game storage solution!

Our advanced combat system adds a ton of awesome effects, choice and strategy to Folklore combat, such as the new Initiative Track as well as Initiative cards, Monster AI and Charge-Up powers! The Initiative cards give modifiers, bonus actions and special abilities or attacks to the characters and creatures who can take advantage of their position on the Initiative Track.  That’s not all, each Initiative card scales to adjust the effect and gameplay specifically for 2 players games, 3-4 player games and 5 player games!

Using the narrative created by Twin Fire Games as your GM guide, follow the 6 new stories to see where each adventure takes you as you level up, gather supplies and move onward into certain danger! This next installation of stories added to your gaming library will allow you to journey further into the world of Folklore!