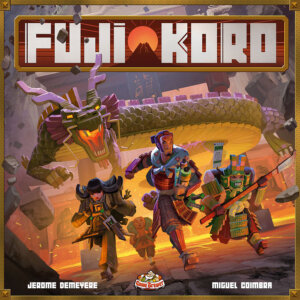 The Asian themed board game Fuji Koro is now available from Game Brewer. In the game, players are samurai  attempting to rescue temple treasures and pious monks from an erupting Mount Fuji. Fuji Koro is for one to six players, ages 12+, plays in around 30 minutes per player, and carries an MSRP of $89.99.

Japan Hosei 4 (1707). Mount Fuji is on the verge of erupting. Red hot lava will soon consume the three secret Seien-ji (???), sacred temples hidden deep in the bowels of the volcano. The Shogun is determined to preserve the precious heritage and sends his most noble and gifted samurai warriors on a quest inside the volcano to retrieve the valuable goods. After a grueling climb through snowstorms and treacherous rocky terrain the samurai find the entrance that leads down into the cavern. The volcano rumbles and the walls start shaking! The floor underneath their feet crumbles and our brave samurai fall into the huge cavern that contains the three temples, which are slowly sinking into the smoldering lava. It is now up to our heroes to explore the cavern and find as many of the relics, sacred scrolls, and monks as possible, to bring back safely to the Shogun before the volcano erupts and all is lost forever.

Fuji Koro can be played in a competitive mode with 2 to 6 players or a cooperative mode with 1 to 6 players. Players will try and gather sacred scrolls and blueprints for magical weapons, gather resources, craft the best possible gear, and try to get out of the volcano before it fully erupts. To make matter worse, players will encounter fantastical dragons on their journey throughout the volcano, that they will have to try and defeat by themselves or with the help of other players. The game continues until the end phase of the game, which is triggered by one player reaching 30 victory points. Once that happens, players will have 8 final turns to escape the volcano.

Offers a competitive mode, 2-6 Players, or a cooperative mode, 1-6 players.

Craft weapons, helmets, sandals, with collected cube resources, to suit a battle or match patterns on scrolls to claim bonus and/or magical qualities.

End game is triggered when players pass a point threshold, then the volcano erupts, filling the game board with lava tiles, making it harder to achieve points in the few remaining turns. 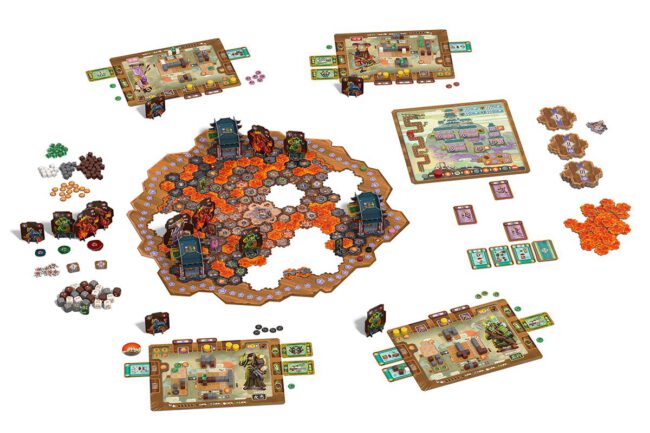