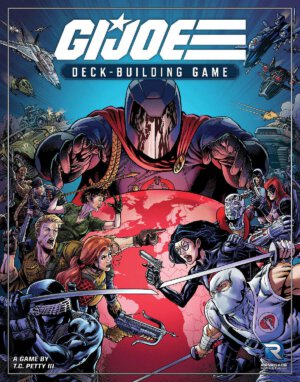 Renegade Game Studios has revealed a new G.I. Joe Deck-Building Game will arrive this Fall. In the game, Designed by T.C. Petty III, the players will each tackle the forces of Cobra in order to thwart the evildoers’ plans. The game is for one to four players, ages 13+, plays in 30 to 70 minutes, and will carry an MSRP of $45.00 when it arrives in October.

Fall In! The evil organization Cobra threatens the world with their schemes and it’s up to you to stop them!

In this Deck-Building game, you and your fellow players will lead teams of G.I. Joe soldiers on missions to stop Cobra’s dastardly plans! Each player starts the game with a meager deck that will grow more powerful as you recruit veterans from the G.I. Joe team, requisition gear, and field new vehicles. This fully cooperative game pits you against increasingly dangerous missions to save the world. This Core Set begins your journey with everything needed to play, but be prepared for more Joes and missions to come!