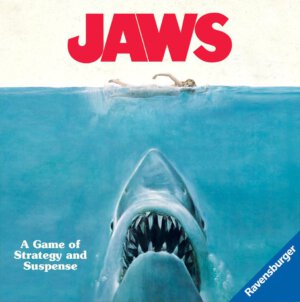 A Target exclusive from Ravensburger made its first appearance this past Sunday and it’s a board game based on the classic book/film Jaws. In the game one player takes on the role of the great white while the others represent the main characters of the tale. It’s man versus sea monster and only one side will emerge victorious. Jaws is for two to four players, ages 12+, plays in around an hour, and carries an MSRP of $29.99.

In Jaws, one player takes on the role of the killer shark off Amity Island, while the other 1-3 players take on the roles of Brody, Hooper and Quint to hunt the shark. Character and event cards define player abilities and create game actions for humans and the shark. Gameplay is divided into two acts — Amity Island and The Orca — played on a double-sided board to replicate the film’s story:

In the Amity Island phase, the shark menaces swimmers and avoids capture. Other players attempt to pinpoint the shark’s location and save swimmers from shark attacks.

In the Orca phase, played on the reverse side of the game board, Brody, Hooper and Quint are aboard the sinking ship engaging in a climactic battle against the shark, while using additional action and strategy cards to defend the Orca from targeted shark attacks.

If humans kill the shark, they win; if the shark attack on the Orca succeeds, the great white shark wins. 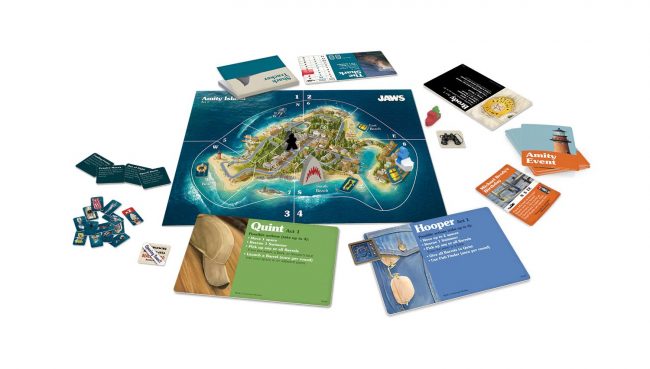