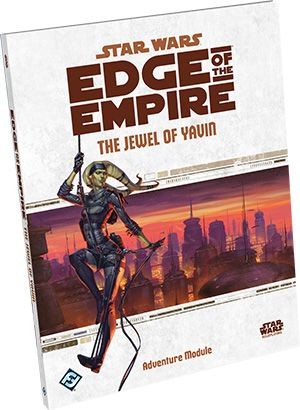 The second Star Wars: Edge of the Empire adventure supplement is on the horizon from the folks at Fantasy Flight Games. The Jewel of Yavin takes players to the Cloud City of Bespin where plenty of opportunities for action and intrigue await both law abiding and not so savory characters. The ninety-six page supplement is set for a March, 2014 release and will carry an MSRP of $29.95.

Scrape together a crew and prepare for the heist of a lifetime in The Jewel of Yavin, a ninety page adventure supplement for Star Wars: Edge of the Empire.

Set in Bespin’s Cloud City, The Jewel of Yavin includes plenty of opportunities for all characters to shine as they work to steal the priceless corusca gem.

Game Masters will find the Cloud City gazetteer section especially useful, both for running The Jewel of Yavin adventure and for basing their own Edge of the Empire campaigns on the floating city. The section features over a dozen pages of material detailing locations in the plaza district, Port Town, and the industrial levels.