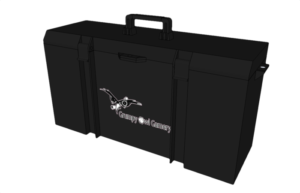 People who like to bring plenty of games to their local gatherings find transporting all those boxes can be a pain. Ask our very own “King of Storage” Elliott Miller about his struggles sometime. Yet, those days may be over as the folks at Grumpy Owl Gamery (not sure why the owl is grumpy, but I digress…) have concocted a design sure to make traveling – games in tow – to your friends, local game days, and even the big conventions a snap!

The project has just launched on Kickstarter so you best get in gear to check it out!

Gamers are often called upon to shuttle around their favorite games to conventions, game nights, vacations, and more. If you are one of these gamers, you know that traveling with games is not just a hassle, but can be worrisome as well. The members of Grumpy Owl Gamery want you to know that you are not alone. Beginning August 12th, gamers will have the opportunity to revolutionize game travel by backing The Keep on Kickstarter. 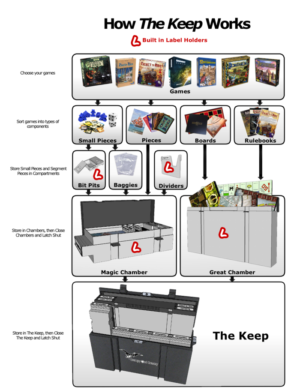 The unique designs have already drawn attention and excitement from notable members of the gaming community including GeekDad and Game Salute to name a
few. The Keep takes all of the disparate ideas in game storage and unites them under the concepts of mobility, organization, and protection for a variety of board and card games.

Every standard gaming component has been reviewed and has its place in The Keep . Boards and rulebooks are stored in the Great Chamber. Cards, mats, and bagged pieces are organized in the Magic Chambers with labeled dividers. Bit Pits store the really small pieces like dice, chits and other tokens. Highlighting its versatility, many non-standard pieces fit in The Keep as well.

Funding through Kickstarter allows the Gamery to overcome the cost of molds, prototypes, and materials without incurring debt like a typical business. The result is higher quality and a significantly lower price for customers. Stretch goals are focused on enhancements and include: serializing and registering Keeps; innovating the Great Chamber’s accordion folder; and a special artwork sleeve for the outer case. There are even plans for a ‘Ultimate’ Keep if the right level of funding is reached.

Whether you play family games, designer board games, collectible card games, RPG tabletop games, or some combination thereof – The Keep has something to offer you. It could be the only game carry case you ever need – but only if it gets enough backers. The base funding goal is $750,000 and will require a great deal of support from the gaming community to succeed. Will gamers embrace such a significant change in quality and efficiency from the hobby game norm?