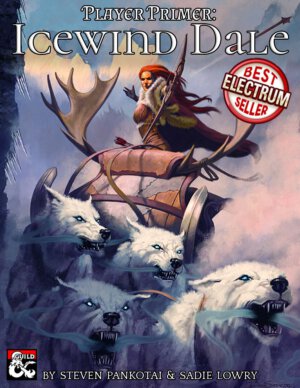 Now available from authors Steven Pankotai and Sadie Lowry, at Dungeon Masters Guild, is the Player Primer: Icewind Dale. Players and DMs can delve into plenty of Icewind Dale Dungeons & Dragons background and options as well as prepare Heroic Chronicles for their characters. The 18 page PDF is currently on sale for $3.71.

Discover the wonders of Faerûn’s frozen tundra with Player Primer: Icewind Dale! This supplement contains all the information DMs and players will need to jump into a Dungeons & Dragons adventure set in Icewind Dale including:

Our Character Chronicle, adapted from the Heroic Chronicle created in Explorer’s Guide to Wildemount, is a system of character creation that helps players create characters with strong ties to Icewind Dale. This includes goals, secrets, and even favorite foods! Useful for any player, this system can also be used to create more fully-realized villains for your arctic escapades.

Icewind Dale is a classic and storied region of Faerûn whose story is continuing in Icewind Dale: Rime of the Frostmaiden. Get ready for Dungeons and Dragons’ next big adventure today with Player Primer: Icewind Dale!

Once you’ve made your heroes, bring them to life in Song of the Mountain: A Player Primer Adventure! This adventure is designed for level 1 characters to be introduced to Icewind Dale, complete with hooks to continue a campaign.