The latest horror game from my pal Hermann Luttman is up for preorder from GMT Games. Players will work together in order to fight off toxic undead mutants in The Plum Island Horror. Six different factions will utilize their strengths, while shoring up their weaknesses, in order to save humanity from an outbreak of mutated beasts. The game is for one to four players, ages 14+, plays in two to three hours, and can be preordered for $64.00 with an expected MSRP of $95.00.

On October 24th of an unspecified year—which we are only legally allowed to disclose as “from the recent past”—“Super Storm Nancy” plowed into the East Coast of the United States. Thousands of miles of coastline were devastated, but for Plum Island, a large albeit vulnerable atoll smack dab in the middle of the storm’s path of destruction, it was a horrifying gray-green, apocalyptic nightmare.

Plum Island is a sprawling isle off the Carolina coast and is home to the vibrant seaside town of Greenport. While the heart of the island’s daily hustle and bustle lies in its commerce and tourism, the predominant employer and revenue generator for the island was housed in a huge complex of nondescript buildings located on the north end of the island. This mega-corporation was known locally as “The Pearl,” or more precisely, the Plum Island Research Laboratory (P.I.R.L.). It was an enormous facility run by scientists who conducted government-sponsored biological research and experimentation. All legal and ethical practices of course—or so we were told.

After the hurricane’s catastrophic cascade of water and wind abated, the island was crippled: all power was lost, there was much structural damage throughout, and the path to the mainland via the Great South Bay suspension bridge was rendered impassable. Due to a perfect confluence of unpredictable factors, the lab’s super-secret and highly experimental cylinders ruptured. The entire facility was inundated with a horrific lethal mixture of chemicals resulting in the deaths and disfigurement of hundreds of personnel who were taking shelter from the storm within the main containment facilities.
But the true horror was yet to come—these “deaths” were only temporary incapacitations. The poor souls who succumbed to the toxins were somehow revived by the bizarre mixture of chemicals, returning to “life” as monstrously altered mutations. In retrospect, we refer to these reanimated creatures as “Horrors” because—well honestly, what else could we possibly call them? The Horrors almost instantaneously evolved into vicious killing abominations that overwhelmed the survivors located in and near the main P.I.R.L. complex. After “The Pearl” was subsumed, there was only one place left to go to sate the voracious appetites of these re-born killers…a “human buffet” known as Greenport.
The Plum Island Horror is a 1 to 4 player game featuring cooperative play that combines tactical-level unit management with a tower-defense style survival mechanic. Each player will control one of six unique factions which represent the various groups that populate Plum Island. Each of these Factions has its own strengths and weaknesses, and the system encourages you to optimize for the group’s strengths and marginalize its weaknesses. Players must coordinate with one another, and the resulting synergy will hopefully be enough to successfully evacuate a city under siege and contain the horrific outbreak that threatens to spread beyond the island itself. If the players can succeed, they will win together, and the world will most likely be none the wiser to the averted crisis. If not, they will lose together and share the blame equally for failing humankind.
Jeff McAleer
Founder/Editor-in-chief of The Gaming Gang website and host of The Gaming Gang Dispatch and other TGG media, Jeff tackles any and all sorts of games but has a special fondness for strategy, conflict sims, and roleplaying games. Plus, he's certainly never at a loss for an opinion...
Latest posts by Jeff McAleer (see all)
Tags: GMT Games, GMT Games P500, Hermann Luttmann, The Plum Island Horror 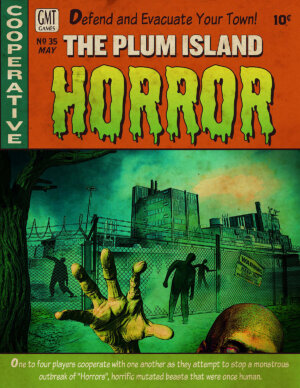 Up to four players will work together in order to fight off toxic undead mutants in The Plum Island Horror.
0
Awful