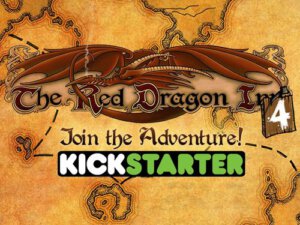 SlugFest Games is taking the Red Dragon Inn series to the high seas with The Red Dragon Inn 4. Not only did the project just launch a couple days back but it’s already well over 100% funded with a month and a half to go.

SFG will be providing prototype demonstrations at the Origins Game Fair games convention in Columbus, Ohio June 12-16, where previews and promotional material will be made available in the SFG booth. The game will be debut at the Gen Con games convention in Indianapolis, IN August 15-18, where demonstrations, events, and the product will be available for purchase the SFG booth. The Red Dragon Inn: 4 will be available through regular distribution in Fall of 2013.

The Red Dragon Inn: 4 is a fast-paced, light-hearted card game for 2 to 4 players. You and your adventuring companions have spent all day slogging through the dungeon, killing monsters and taking their stuff. Now you’re back in town, healed up, cleaned up, and ready to party at the Red Dragon Inn.

The Red Dragon Inn: 4 will include:

* A Drink Deck featuring dew cards like Grog and Rum