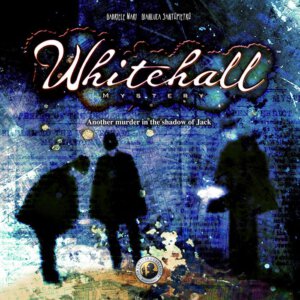 A new stand alone title in the Letters from Whitechapel series is on the horizon from Fantasy Flight Games. In Whitehall Mystery, one player will take on the role of Jack the Ripper secretly moving throughout London as up to three other players will take up the pursuit of the infamous killer. The game can also be used as an expansion to Letters from Whitechapel utilizing new rules and character abilities. Whitehall Mystery is set for a summer release and will carry an MSRP of $39.95.

It was just past three o’clock in the afternoon. I had gone down to the basement to look for some boards, and I immediately noticed the package: roughly two by three feet, wrapped up in paper. What the devil was it? I unwrapped it to find black fabric underneath. A petticoat? Even before I saw what was inside, the stench that had been unleashed explained everything.
– Frederick Wildborn, carpenter

In 1888, construction of the New Scotland Yard in London’s Whitehall District comes to a screeching halt when a woman’s torso is left on the police’s doorstep. Though somewhat out of character with the most recent wave of brutal murders, the grisly nature of the crime can only mean one thing: Jack the Ripper has returned.

This time, the killer emerges with a new game of cat-and-mouse as he plans to leave four more limbs in unknown locations throughout the city. The New Scotland Yard must reach beyond their precinct to assemble a new team of experts to hunt down the monster and bring him to justice. This may be the investigators’ last chance to capture the murderer before he slips away forever.

Fantasy Flight Games is pleased to announce the upcoming release of Whitehall Mystery, the newest addition to the Letters from Whitechapel series. The hunt for history’s most notorious serial killer continues in this streamlined standalone adventure that explores one of London’s most intriguing unsolved cases.