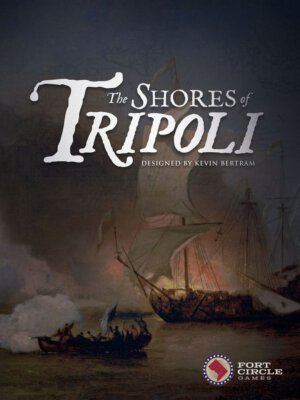 A very interesting looking card driven, historical wargame is up for crowdfunding for newcomers Fort Circle Games. In The Shores of Tripoli, up to two players will recreate the Barbary Coast battles of the early 19th century as America strove to protect its merchant shipping while Tripolitania aimed to expand their borders and plunder merchantmen along the way. The game is designed to be played solitaire too. The Shores of Tripoli is for one or two players, ages 12+, and plays in around 45-60 minutes. The project is past the 200% funding mark and you can reserve a copy of the game for a $50.00 pledge. Expected delivery is April, 2020.

When America was a young nation, our commercial vessels abroad were seen as easy prey for both pirates and hostile nations. Ships in the Mediterranean, for example, were subject to the whims of the Barbary States, which demanded payment for safe passage.  In 1801, Thomas Jefferson decided to support our merchant ships by sending a “squadron of observation” into the Mediterranean.  At the same time, Tripolitania, led by the bashaw of Tripoli, was trying to solidify power both on land and at sea.

By the time the American squadron arrived, the bashaw had ordered the flagpole cut down at the American consulate in Tripoli – a declaration of war.  The United States and Tripolitania battled on sea and then on land until, in 1805, Tripoli agreed to sign the Treaty of Peace and Amity – an American victory.

The Shores of Tripoli tasks one or two players to recreate this swashbuckling episode from Early American history. As the United States, you will pressure Tripolitania and her allies to allow free movement of American commerce or face the consequences. As the bashaw of Tripoli, your aim is to continue the lucrative piracy of the fearsome corsairs while also countering the American threat on land and sea.

Each player has a deck of cards that represent historical events and leaders from the conflict with a third deck for solitaire play.  Players play cards to move ships, start battles, go on pirate raids, engage in diplomacy and receive reinforcements.  Success or failure in battle is determined by a roll of the dice.  The American player wins by either forcing Tripolitania into signing the historical peace treaty or by capturing Tripoli itself and installing a pro-American ruler.  The Tripolitan player wins by either capturing twelve merchant vessels or sinking four American frigates. 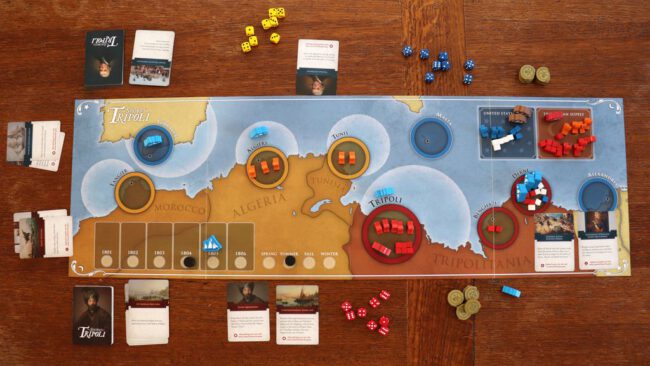