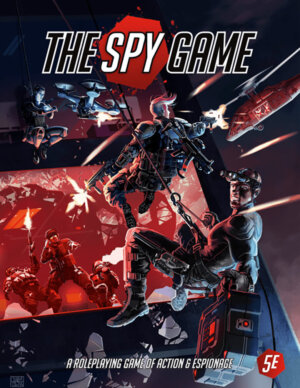 Following a successful Kickstarter, Black Cats Gaming has released a new espionage roleplaying game in pdf. The Spy Game transports players into an action packed world, filled with covert operations, built upon the mechanics of 5E. The 264 page PDF is now available at DriveThruRPG for $20.00. You can also check out the free quickstart here.

Take on Secret Missions and Covert Operations in a Clandestine World

Welcome Agent. Enter a world of international stealth and intrigue in a modern setting. Delve into a world of spies, assassins, diabolical masterminds and suave secret agents.

The Spy Game is an action & espionage roleplaying game book that uses the 5th Edition of the world’s most famous roleplaying game rules. Peer behind the curtain of society into the world of the Agencies and take your place as a world class spy. Together with your crew of con-artists, specialists, infiltrators and hackers you will influence, subvert and overcome any challenge.

Will you topple corrupt governments or protect the interests of the highest bidder? Will you take out the target before they achieve their aims, or aid them? Will you counter worldwide threats, or become them yourselves? The Spy Game places your own intelligence agency on the world stage, where the promise of adventure waits for you!