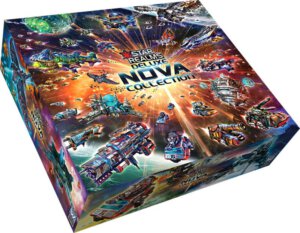 If you’ve ever been interested in diving into the deck-building game Star Realms, from White Wizard Games, the time is certainly ripe right now. The Star Realms Deluxe Nova Collection just launched on Kickstarter yesterday and includes a slew of gaming goodness; this boxed set will be a KS exclusive and will not be available through distributors. The collection is one to six players, ages 12+, and plays in 15-45 minutes. The project has blazed past $250k in funding and you can reserve a copy of the set for a $99.00 pledge through January 30th. There is currently an early bird special for the next few hours after this posts which saves you $10.00 ($89.00). Expected delivery is this November.

Get the ultimate version of the award winning original Star Realms Deckbuilding Game and it’s expansions!

Star Realms is a fast-paced game of space battles that combines the fun of a deckbuilding game with the interactivity of Trading Card Game-style combat. As you play, you make use of Trade to acquire new Ships and Bases from the cards being turned face up in the Trade Row.

You use the Ships and Bases you acquire to either generate more Trade, or to generate Combat to attack your opponent and their Bases. When you reduce your opponent’s score (called Authority) to zero, you win! Battle your friends or team up to play cooperatively against the game!

This entire set is Kickstarter Exclusive. Unlike normal Star Realms products, it will not be available in distribution. If you want this awesome collection, back now.