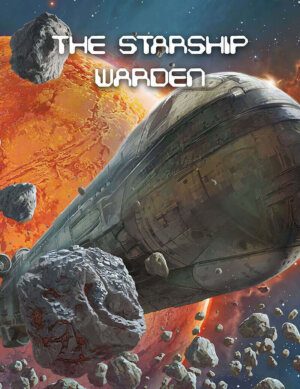 Troll Lord Games has released the massive roleplaying adventure and setting book The Starship Warden. Written by James M. Ward and Christopher Clark, the book expands on the world within a ship setting from the beloved classic Metamorphosis Alpha RPG. The 648 page hardcover is available through Troll Lord for $79.99 while the PDF can be had for $19.99 at DriveThruRPG.

They designed the Starship Warden to house, feed and clothe over a million people. To do this the designers outfitted this massive ship, miles long and miles wide, to serve as a home for people offering up quarters and cafeterias, restaurants, and malls all intermingled with a host of features to mimic earth-like conditions, from artificial lakes to fields of crops. Her maiden voyage began with hopes and dreams of a future like nothing humanity had ever seen.

But that was long ago. There has been no contact between the Warden and Earth for many long years for on the ship something went horribly awry. Radiation leaks, singularity, mutations, madness, what it was, only the inhabitants could say. Whatever it was, her inhabitants, those that lived, dwell in a world of want and despair, and when they were not preying upon one another, they fight beastly mutants, cyborgs, self-aware robotic humanoids and all the other creatures who vie for the precious resources of the beleaguered starship.

It is your time now. Rise in the chaos of the Warden and bend its apocalypse to your will — or be ground away in the lonely quiet of deep space.

The Starship Warden is a sandbox adventure setting written by James M. Ward and Christopher Clark.  It is intended for use with the StarSiege RPG, a Siege Engine game, But, if you are loyal to the old MA, don’t despair, the Starship Warden is written to allow you to use your original Metamorphis Alpha Rules and begin a lifetime worth of play. The Starship Warden is a 650+ page black and white book. An interstellar starship, set adrift, with 17 monstrous decks to explore, hordes of creatures and mutants, treasures both fantastic and scientific, it is a world within a ship. A setting like no other.