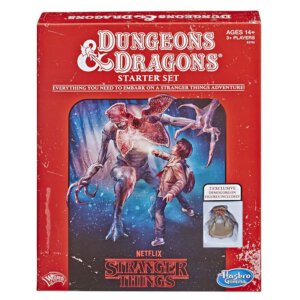 If you’re a fan of Stranger Things (and who isn’t?) as well as Dungeons & Dragons, then you might be interested in the upcoming boxed set arriving this Spring from Hasbro. The Stranger Things Dungeons & Dragons Starter Set will include a quickstart rulebook, dice, one painted and one unpainted Demogorgon miniature, as well as an adventure which is being presented as the D&D tale the character Mike was running for his friends in the first season of the hit Netflix series. The starter set is for ages 14+ and will carry an MSRP of $29.99 when it arrives May 1st.

Pick your character — will you be Will the Wise or Dustin the Dwarf? Get your fireballs ready as you investigate the mysterious castle and battle the ferocious Demogorgon. Prepare for just about anything, because the game just got stranger.