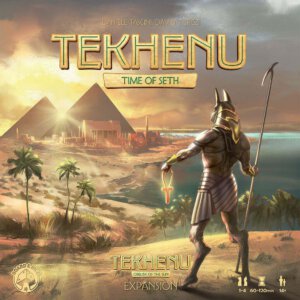 Board & Dice will release a new expansion for Tekhenu this Fall. Time of Seth will include rules and mechanics based on the conquests made by ancient Egypt. The expansion also tightens up gameplay with two players. Tekhenu: Time of Seth is for one to four players, ages 14+, plays in around one to two hours, and will carry an MSRP of $35.00.

With the power and splendor of Egypt increasing, its influence now reaches far beyond its borders. Seth, the god of conflict, demands that you subdue Canaan, and wage war on the mighty Hittite Empire. Your soldiers are to march on any land that dares defy you or pose a threat to your kingdom. It is the time to muster your armies, gather your priests, claim mighty artifacts and secure the favor of a powerful cult to pave your way into even greater victories.

Tekhenu: Time of Seth adds new layers of interaction and new options to Tekhenu: Obelisk of the Sun. A new board opens up options of conquering neighboring lands to receive in-game benefits, as well as new scoring opportunities. New dice allow for mustering Soldiers and gathering priests. However, conquest comes with a price, as with more battles fought, balancing one’s deeds becomes more complicated than before.

Apart from soldiers needed to take control of lands beyond the borders of Egypt, players also gather priests that allow them to take control of artifacts. These new cards offer new and nuanced ways of planning turns, combining strategic plays and scoring victory points.