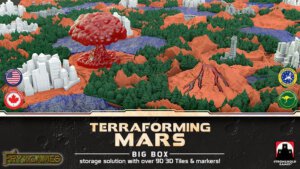 Fans of the mega hit Terrafoming Mars, from FryxGames and Stronghold Games, will want to take note of the Kickstarter which launched a couple hours ago. The Terraforming Mars Big Box is not only a storage solution for the base game and all its expansions but also includes an impressive array of 3D tiles designed to dazzle gamers around your table. If you don’t already own Terraforming Mars (and any/all of the expansions) there are pledge levels to remedy that situation as well.

The Small Box contains the 3D tiles and promos and is available for a $79.00 pledge while the Big Box adds the storage solution and can be yours for a $99.00 pledge. The project funded in minutes and is rapidly approaching $500K in the first couple of hours. The Kickstarter runs through July 3rd with an expected delivery of March next year.

Terraforming Mars: Big Box is both a storage option for all the Terraforming Mars material released to date — the base game, five expansions, and the first-player rover — and a set of 3D terrain tiles to dress up the game. Included in the box are: