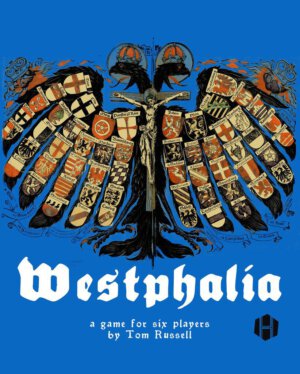 The newest release from Hollandspiele looks mighty interesting for gamers who enjoy the art of negotiation as must as strategic maneuvering across battlefields. Westphalia places six (and ONLY six) players in the roles of the major combatants of the Thirty Years and Eighty Years Wars as each aims to secure goals, which most benefit that participant, as the conflicts draw to a close. The game is for six players only, ages 13+ (my guess), plays in about two hours, and carries an MSRP of $50.00. Personally, this looks like a title which will surely intrigue fans of the Avalon Hill classic Diplomacy.

Westphalia concerns the diplomatic negotiations and military campaigns that brought an end to the Thirty Years War and Eighty Years War. The question isn’t a matter of who “wins” the war – that was decided a long time ago. Instead, each player seeks to arrive at a settlement that meets their own political, confessional, and economic goals. These goals are not mutually exclusive: if multiple players meet their victory conditions, they all win. The trick is, if all six players manage to meet their goals, then the game goes to a scoring round, and only one player wins.

The result is a mix of cooperation and competition between six asymmetric factions (Austria, Bavaria, Spain, France, Sweden, and the Dutch Republic). The game unfolds in alternating Diplomacy Phases, in which anything and everything is up for negotiation, and Military Phases, in which tense cat-and-mouse chases give players the leverage they need in talks.

There is no money in the game, only Debt, and you only ever seem to get more of it. At the end of the game, your Debt is reduced according to your accomplishments, and the remaining Debt is compared to faction-specific benchmarks to check for victory. Additionally, two factions must each ensure that two other specific factions meet their goals in order to meet their own: Austria must ensure victory for Bavaria and Spain, while France must do the same for Sweden and the Dutch Republic. This isn’t mutual, however; once Bavaria gets what it wants, for example, it can hang Austria out to dry.

This is a game for exactly six players: no more, no less. It cannot and does not scale to suit other player counts. 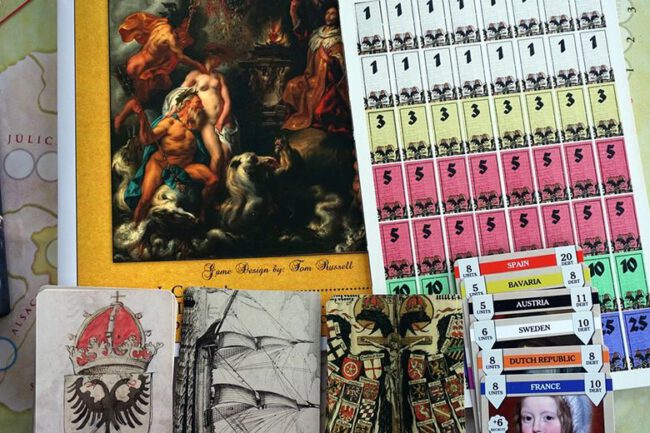