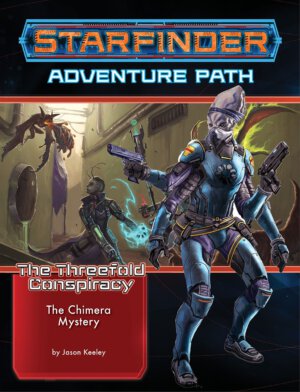 The latest Starfinder adventure path will take flight next February as Paizo Inc begins The Threefold Conspiracy. The first chapter, The Chimera Mystery, will place the player characters aboard a luxury liner investigating the disappearance of the ship’s security officer. The 64 page softcover will carry an MSRP of $22.95.

The security officer aboard a luxury space liner, the Chimera, goes missing after the heroes witness her arguing with a passenger. Soon after, the Chimera’s engines fail and defy repair. A scholarly patron asks the heroes to investigate the disappearance, which involves murder, misdirection, and misapprehension. To unravel the murder mystery around them, the heroes must follow clues about more than one enigma aboard the Chimera. Secrets and unexpected foes abound. In the end, the investigators find that the whole whodunit is only part of a much larger conspiracy!

“The Chimera Mystery” is a Starfinder Roleplaying Game adventure for four 1st-level characters. This adventure begins the Threefold Conspiracy Adventure Path, a six-part, monthly campaign in which the heroes unravel the machinations of insidious aliens who have infiltrated galactic society. This volume also includes an article on running mystery scenarios, more on spies in the Pact Worlds and beyond, and a selection of new alien creatures!